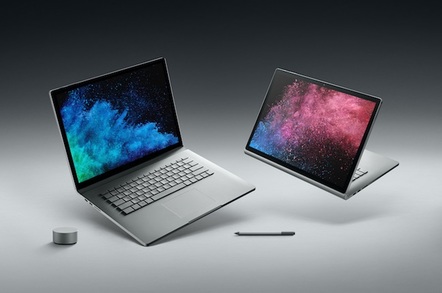 If you’re running a Surface Book 2, you might want to hold off on the latest cumulative update that is making some in the line quite poorly and their owners quite irate.

The problem was first reported on Reddit, as users huddled around the virtual campfire to sing songs and exchange tales of Surface Book 2 woe.

Blue Screens of Death (BSOD) first began occurring shortly after the update, KB4467682, was dropped on 27 November. This update is for users of the 1803 build of Windows 10 (also known as the April 2018 Update) and contains a veritable smorgasbord of fixes as well as few known issues relating to the seek bar in Windows Media Player and some .NET problems.

“Bricks your Surface Book 2 to the point you have to reinstall Windows” is, curiously, not listed. Funny that.

However, this is what several users have found themselves doing as a last resort in order to get rid of the problem.

The BSOD headache manifests itself by throwing a SYSTEM THREAD EXCEPTION NOT HANDLED error and rebooting the computer. Some users reported seeing the error repeatedly, while others are luckier, losing their work only three times a day or so.

It isn’t a good look for Microsoft’s flagship laptop (which we, incidentally, rather liked). With an eyewatering price-tag, users would be forgiven for expecting that it should be a showcase of how Windows should be.

Unless, of course, shoddy updates borking hardware is the new normal.

As for the afflicted users, uninstalling the cumulative update appears to do the trick. The only problem is that customers face a sphincter-clenchingly short window in which to actually log in, leap into Update History, find the install, and click uninsta...

Hence some users have had to resort to reinstalling the operating system from scratch.

Microsoft’s own support forums are beginning to register users with the issue (although those have yet to go through the diagnosis steps undertaken by Redditors.)

There is, alas, no rhyme nor reason to what has specifically caused the issue and no discernible pattern of usage resulting in the crash. Other than the thing being turned on.

We have contacted Microsoft to find out what is going on, but in the meantime if your pricey Surface Book 2 has turned into a hefty paperweight, good for only showing a BSOD, perhaps try to back out that update. ®

* Thanks to the Surface Book 2-owning, BSOD-experiencing Reg reader for the tip