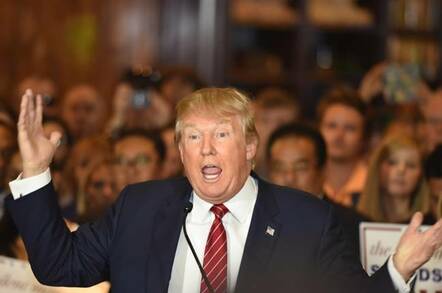 Execs from Oracle, Microsoft and Google are reportedly to meet US president Donald Trump next week amid strained relations between tech giants and lawmakers.

The Wall Street Journal, citing an email from White House tech policy advisor Michael Kratsios, said the meeting would be held next Thursday.

Google's Sundar Pichai is also expected to attend, with the talks to be held the day after he appears in front of the House Judiciary Committee.

That meeting was arranged after Google was empty-chaired by the US Senate Intelligence Committee at a hearing with Facebook and Twitter back in September.

Next week's hearing will examine Google's mass data slurping, how it uses that information and its filtering practices.

But it's hard to imagine it won't also touch on the big-ticket issues facing internet companies, such as content moderation, censorship, regulation – and of course Trump's pet peeve, fake news.

Google search results for “Trump News” shows only the viewing/reporting of Fake News Media. In other words, they have it RIGGED, for me & others, so that almost all stories & news is BAD. Fake CNN is prominent. Republican/Conservative & Fair Media is shut out. Illegal? 96% of....

Meanwhile, the administration is under pressure from staffers at tech giants, who are vocally critical of the Trump administration's immigration policies, urging their bosses to ditch government contracts.

Microsoft, for one, is resolutely ignoring such requests. Prez Brad Smith said that to pull out would simply deprive civil servants of Redmond's tech (heaven forfend) and that emerging tech won't be addressed "wisely" if the big players drop out of the conversation.

Google, however, recently withdrew from the bidding process for the $10bn Pentagon cloud contract, JEDI, saying it "couldn't be assured that it would align with our AI Principles". Coincidentally, it hasn't got the right certifications to do it anyway.

Of the other players at the Trump table, Oracle has made perhaps the biggest fuss about JEDI, lodging two official (and failed) complaints about the DoD's intention to award the contract to one cloud vendor.

In those filings, Big Red warned of the damage to innovation and security by locking the government into one company's tech for a decade – something it's particularly concerned about now that the odds-on favourite to win is nemesis AWS.

Oracle's Catz has raised the issue with Trump previously – she has long been linked to the billionaire turned politician, and had been tipped for positions including secretary of the Treasury and national security adviser.

Amazon, meanwhile, is not on the list reported by WSJ, and Trump has vocally called out the firm's online retail business, accusing it of avoiding tax and putting US retailers out of business. ®