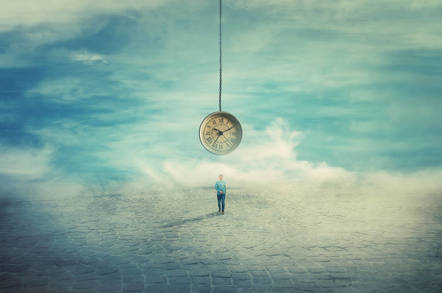 Physicists have designed super-accurate atomic clocks that may be able to detect gravitational waves and dark matter by the way those phenomena affect gravity and therefore time.

The eggheads experimented with super-cooled ytterbium, a rare earth element, to measure the passage of time, and see how gravity affected it.

Grav waves and dark matter have an effect on gravity, and thus time, variations of which can be detected by these precise clocks, indicating the presence of either phenomenon. That's the basic outline of this scientific work, anyway.

The team of researchers, led by the National Institute of Standards and Technology in the States, say their atomic clocks are sensitive enough to measure gravity's distortion of time here on Earth and in space.

The devices work by cooling ytterbium atoms to a few microkelvin – a smidgen above absolute zero – and holding them between a series of laser beams organised in an optical lattice.

Time can be tracked by keeping count of the number of oscillations of something vibrating at a known precisely fixed frequency: time equals the number of oscillations divided by the frequency. In this experiment, the laser light excited the ytterbium atoms, and their electrons oscillated by jumping between energy levels, allowing time to be measured. Deviations in time observed by two of these clocks in this manner indicates some outside effect.

Crucially, these devices are said to be more accurate than anything we've seen before. Scientists have previously used atomic clocks to prod around the effects of gravity on time.

The boffins described their work in a paper published in Nature on Wednesday.

As you'd expect, if two of these clocks were placed at different altitudes near the Earth's surface, the higher one would tick slightly faster than the lower one, due to classic time dilatation.

The differences in the timing of their ticks and tocks could be further altered if a large-enough gravitational wave passed by. And if the clocks were sent up to space, they might be able to pick up the effects of dark matter, or test general relativity.

“Einstein first predicted in his general theory of relativity that gravity alters time, an effect sometimes called the gravitational redshift. Relative to a given observer, time (and the devices that measure time—clocks) is seen to evolve more slowly deeper in a gravity potential,” the team's paper stated, adding:

In two independent ytterbium optical lattice clocks, we demonstrate unprecedented values of three fundamental benchmarks of clock performance ... the performance of these clocks should enable geodesy beyond the state-of-the-art level. These optical clocks could further be used to explore geophysical phenomena, detect gravitational waves, test general relativity, and search for dark matter.

To summarize in one word: fascinating. ®