Apple in another dust-up with its fans: iMacs, MacBooks lack filters, choke on grime – lawsuit 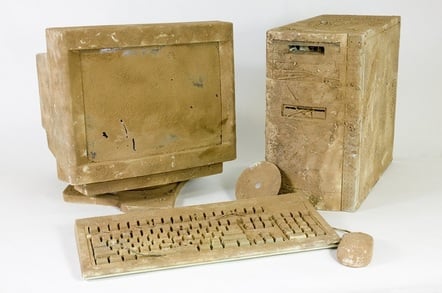 Apple was sued in the US this week over claims that design flaws in its iMac desktop and MacBook laptop computers allow dust into the machines, causing the screens, fans, and circuitry to fail.

The complaint, filed Wednesday in San Jose, California, on behalf of plaintiffs Kim Ahern of Arizona, Nikolas Frenzel of Colorado, and Justin Evans of Wisconsin, suggests Apple's marketing claims that its products are rigorously tested are misleading. It also argues the company is overcharging non-warranty customers for repairs.

The district court filing contends that Apple's omission of dust filters in its iMacs and MacBooks has led to repeated product failures, in the form of smudged screens and fan malfunctions that result in overheating and processor crashes.

"The components in Apple’s computers generate a great deal of heat during use, and Apple installed fans and vents to cool them down," the complaint explains. "But Apple did not install any filters for the vents. As a result of this filter defect, the fans suck in dirt and debris that get stuck behind the screen, causing a permanent dark smudging to appear in the corners of the screens."

Beyond degrading screen appearance and clarity, the presence of dust in these machines can damage the fan that maintains a safe temperature for the motherboard, the lawsuit contends. Once the fan stop working, the CPU may overheat and cause the machine to crash.

"Apple knew that not installing filters on the computers would have negative consequences for computer owners, but decided not to install them, either for aesthetic or monetary reasons," the lawsuit paperwork states. "On Apple’s own website, computer owners have been complaining about the dark, smudgy marks on their displays for years, which often appeared just after their one-year warranty expired."

Customer complaints about smudged screens can be found in Apple support forums and in blog posts.

Apple this year added a rubber separator inside its laptop keyboards to address the problem.

With regard to iMacs, Apple is said to charge about $600 for a smudge fix that involves replacing the screen. But the legal filing argues the Silicon Valley giant has failed to inform customers that iMac screens, held in place with magnets, can be removed to clear trapped dust without much effort or expense.

"Apple could simply use suction cups to remove the glass panel on many of them, and use a vacuum or a cloth to clean the screen," the complaint states. "Instead, Apple tells customers that they must replace the entire screen, at a cost exceeding $600, apparently in order to increase Apple’s profits at the expense of the customer."

The lawsuit alleges that Apple violated California laws governing unfair competition, false advertising, breach of contract, disclosure obligations and consumer protection. It seeks recognition as a class action, on behalf of other customers believed to be affected.

The Register asked the always chatty Apple for comment. We've not heard back. ®