Critics slam 'conflict of interest', cosying up to tech firms 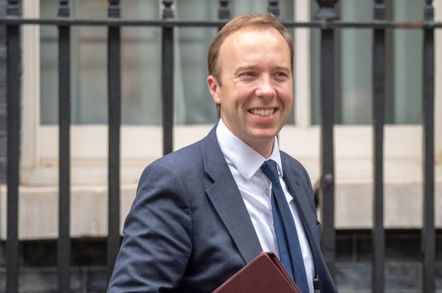 Health secretary Matt Hancock should focus on scrutinising health tech firms rather than endorsing them, after he appeared in an article about Babylon Health, maker of the controversial GP at Hand app.

That's the general consensus about a piece that appeared in last night's London Evening Standard under the title "Technology can be a great fixer for the NHS" and "in association with Babylon". It saw Hancock appear next to a list of apps he – or his PR handlers – claim he uses.

Of course, Babylon makes the list. The app also gets a namecheck in the puff piece: "'I've become known for using this GP at Hand app,' he chuckles… 'We should embrace technology that helps patient outcomes'."

The former Minister of Fun has drawn criticism for his apparently cosy relationship with Babylon before, endorsing it almost as soon as he took on the role leading government decision-making on the UK's health service.

But his appearance on a double-page spread running next to Babylon's branding has raised more than a few eyebrows.

"It's difficult to know which element of this to take issue with," said data scientist Maxine Mackintosh on Twitter.

It’s difficult to know which element of this to take issue with; I’ll settle on the dangerous blurring of @MattHancock’s personal use of a service in a sponsored feature with what an SoS endorses in an evidence-based assessment of what is best for the NHS. This is embarrassing. pic.twitter.com/nTSWYDcOSH

Palliative care doctor Rachel Clarke echoed this sentiment. "Perhaps the concept of conflict of interest is too old fashioned to interest him. But in medicine, it's crucial. What on earth is he thinking?"

Hancock's department has claimed it didn't know Babylon's branding would be all over the article – but the health secretary still trumpets the biz, a decision which at best is tone-deaf – and has led to criticism from the people he is supposed to be representing.

Just last week GP leaders said they couldn't have confidence in Hancock as health secretary if he continued to endorse the app.

Although that group does have something of a vested interest – the app is aimed squarely at their business – there are real concerns among doctors that the app gets diagnoses wrong.

In July, a set of safety restrictions were imposed (PDF) on the app by clinical commissioners due to patient safety concerns as Babylon tried to expand to Birmingham.

These have now been lifted – but an article published in The Lancet this month concluded of Babylon's tech that "further clinical evaluation is necessary to ensure confidence in patient safety".

The paper questioned Babylon's claims that its Diagnostic and Triage System had outperformed the average human doctor on a particular type of GP exam. Rather, it found the data used was entered by doctors, not patients, and that no statistical significance testing had been carried out.

Meanwhile, the ASA last month upheld complaints about ads for the GP at Hand app, saying it wasn't clear patients had to leave their current GP or that it was only available in certain areas.

Amid such controversies, one might hope the politician at the heart of health policy would hold back on glowing endorsements based purely on personal experience. As the old adage goes, the plural of anecdotes is not data.

Hancock, though, appears to be a fully paid-up member of the tech can save us lobby. Certainly, he meets with them enough. Figures from Transparency International show he was the top host in the two years he was worked at the Department for Digital, Culture, Media and Sport – holding a whopping 450 meetings.

Among these were pow-wows with the usual suspects: Twitter, Microsoft, Facebook (including with Mark Zuckerberg himself) and Google, as well as OpenReach, various industry groups and DeepMind.

Hancock's eagerness to embrace tech has landed him in hot water before: his eponymous app – released while he was talking up GDPR – is now synonymous with privacy cock-ups. Complaints about the app to the Information Commissioner's Office from privacy expert Pat Walshe have gone unanswered for 10 months.

Dear @ICOnews I've just emailed to follow up Ref RFA0725189. It's been almost TEN months. I know you've been busy with the GDPR & Facebook & all, but ya know, TEN months :(

My latest email also highlights how @MattHancock failed to answer my questions from Feb 18 #HanCocksApp https://t.co/4DYBCVHLFJ

“When he was still the minister responsible for data protection, Hancock released an app that was flawed in data protection terms in several ways,” Eerke Boiten, professor of cyber security at De Montfort University, Leicester, told The Register.

"He is now responsible for health, and appears in an ad for a health app that has been shown to get diagnoses wrong in dangerous ways, and whose business model undermines the NHS."

Rather, Boiten said, Hancock's primary focus in health tech should be ensuring that there is proper oversight of "happy-clappy tech solutions", whether they are an app or the push for increased use of artificial intelligence in the NHS.

And it's not like there isn't plenty for the minister to scrutinise. DeepMind Health – the Alphabet-owned operation that escaped with a slapped wrist for sucking up 1.6 million patient records – this month announced it was being swallowed by sister company Google.

The move came despite warnings from DeepMind Health's own ethics panel that the firm needed to make its separation from Google more clear in order to regain public trust. Not that they have to worry about inconvenient warnings anymore: the panel was disbanded as part of the shift.

Hancock's interview in the free London paper, though, makes a reference to a different DeepMind project that used AI to improve the detection of macular generation, as a demonstration of the power data can have to healthcare.

But this smacks of cherry-picking the positive aspects of technology, while glossing over patients' and clinicians' fears about the access big tech is being granted to NHS data.

As others have pointed out, there is a crucial difference between tech startups that help the government deliver services, and those that seek an easy back-door to privatised services with data slurped from the public sector.

Such concerns about data access are responded to briefly in the piece, with Hancock reported to have said they are "understandable" but who almost immediately shrugged them off with reference to a new (voluntary) code of conduct with firms.

And, as Boiten noted, Hancock can promise people there are more safeguards to keep data secure, but that "doesn't address the ongoing issue of commercial companies receiving and exploiting NHS data, without a benefit to the NHS or its patients".

Moreover, he said, "reducing data protection to data security is a common deflection, especially when privacy is at stake". ®