I was once one of you, F1 star Lewis Hamilton tells delighted IT bods

Then he roasted HPE over gender gap 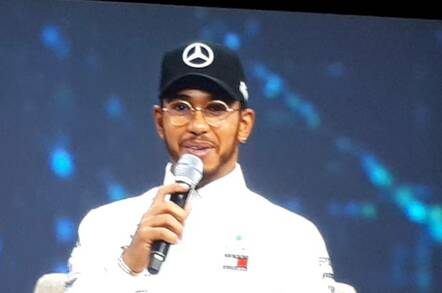 HPE Discover 2018 Formula 1 driver Lewis Hamilton used to be a PFY working on mainframes before his racing career took off, he revealed today during HPE's Discover conference in Madrid.

The British racing driver, who notched up yet another Grand Prix victory in Abu Dhabi last Saturday, was at the conference to talk about how HPE's tech support for the Mercedes AMG Petronas racing team had helped him speed to victory.

"I used to do IT," said Hamilton in an aside during an on-stage conversation with HPE chief exec Antonio Neri, whose passion outside work is cars and racing.

"My dad was into IT and worked for British Rail and then started his own company, with IT and network support. When I was 18... I would go around to corporate companies and do all these test runs on their mainframes."

He also took an on-stage swipe at Neri, directly asking the CEO: "There's a lot of men [in the audience], it's not very strong on the women front, why is that?"

A flustered Neri took it on the chin, replying: "Ah, we have a problem here." Hamilton was previously criticised by the BBC for hailing the return of grid girls to F1; female models who stand around the teams, drivers and cars in a decorative – and what some feel is a sexist and objectifying – way.

Speaking to the press along with Hamilton was the Northamptonshire-based racing team's IT chief, Matt Harris, who highlighted how some computational fluid dynamics workflows had been sped up through HPE's tech support from "three days down to one day" – a "massive difference" apparently – as well as other workloads that "used to take four weeks that's now taking one day".

Highlighting the sheer speed needed behind the scenes as well as on the F1 racetrack, Harris told the assembled press audience: "Our iteration time is about 375 hours between iterations of a car. Most companies won't iterate in 375 hours, not even a software company. It's critical systems underlying that – ideally not being seen by these guys," he said, indicating Hamilton and Mercedes-AMG Petronas team principal Toto Wolff.

Hamilton receives some of the data while "sat in the car" during races and practice runs, continued Harris, who spoke about the "huge amount of compute that goes in, from the strategy team to the setup [team] for the car".

The team is sceptical of machine learning technology, he said, revealing there was a "bit of a split in senior management" over the details of what it could achieve for them, even though there are gains to be had. "The computer is finding things the human wasn't spotting. This is something, a first where we can say the computer is better than the human. That's the first advantage we're going to see for next week's car."

Listening to all this, Hamilton – who had previously spoken about enjoying karting because it was "very basic, just tyres and engine, low tech" – joked: "Are you working on a system where you don't need the driver?"

Two lucky people from HPE have been embedded into the F1 team: a data scientist and a techie. ®

Monster Scalextric Formula 1 circuit to go under the hammer

F1? No, it's Formula E as electric racing cars hit the track