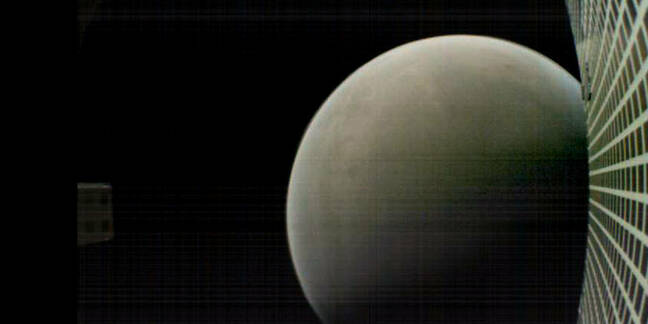 Vid Landing a spacecraft on Mars is nerve racking and prone to failure, as you can quite well imagine. But fear not, NASA was able to monitor the whole process for the InSight spacecraft thanks to two briefcase-sized CubeSats.

Nicknamed WALL-E and EVE after the two main characters in that popular Pixar film, the little satellites were launched in May 2018 by the same rocket carrying the main Martian probe, and split before the lander set off toward the Red Planet's surface. The CubeSat mission, dubbed MarCO, aimed to determine whether the small birds could survive the perilous multi-million-mile journey, and be useful for relaying back data and images from the landing. See below for an overview of the project:

The rectangular CubeSats, weighing in at about 13.5kg each, are the first of their kind to study a planet other than Earth. After separation from the launch rocket, they embarked on a different trajectory to the Red Planet than Insight, and deployed their radio antennas and solar panels to begin their work.

Their goal was to send back to base vital information about the status of the InSight lander as it attempted to touchdown on the Martian surface. During the landing phase, InSight transmitted its updates using ultra high frequency (UHF) radio waves. NASA’s Mars Reconnaissance Orbiter (MRO), which circles the distant unforgiving dust world, can pick these signals up, but cannot always begin to repeat them back to Earth immediately due to its position around the planet. The alien body might be in the way, or Earth might not be an ideal spot.

Even when the orbiter has a clear shot at Earth, the MRO cannot simultaneously receive data from Insight on the surface and transmit it over to our home world. All in all, NASA's ground control would have to sit around for more than an hour after MRO received the data to find out whether InSight had indeed landed.

WALL-E and EVE, however, reduced that time to just eight minutes by acting as simultaneous relays: picking up telemetry on UHF, and beaming it back to Earth on X band radio. They were also positioned just right to get a clear line to Earth. Their softball-shaped X band radio can shift a whopping 8 kilobytes a second.

"WALL-E and EVE performed just as we expected them to," said Andy Klesh, the chief engineer for the MarCO mission. "They were an excellent test of how CubeSats can serve as 'tag-alongs' on future missions, giving engineers up-to-the-minute feedback during a landing.”

On Monday this week, as NASA's InSight was invading the Red Planet, EVE beamed back this photo of the rocky globe from a distance of 4,700 miles (7,600 kilometres).

NASA reckons that the short development time and success of MarCO paves the way for CubeSats to act as secondary instruments to track spacecraft and study the Solar System. ®