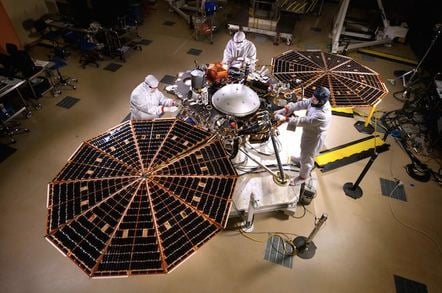 Vid NASA’s InSight lander today successfully fell through the atmosphere of Mars to touchdown in seemingly one piece on the planet's surface.

The $810m probe had to execute dozens of steps perfectly in a short period of time as it descended upon the Martian landscape. Tom Hoffman, InSight’s project manager, described the journey as “six and a half minutes of terror” during NASA’s live online broadcast of the feat.

A team of engineers, nervously hunched over computer screens, erupted in cheers as they received confirmation that InSight had made it to the alien planet, which is at least 55 million kilometres or 34 million miles away from Earth. Landing on the unforgiving dust world is tricky, to say the least, and about two in five of all missions to the Red Planet have failed. InSight is now sitting on Elysium Planitia, a plot of land near the Gale crater, near the equator, and has beamed back its first snap to show it's alive. 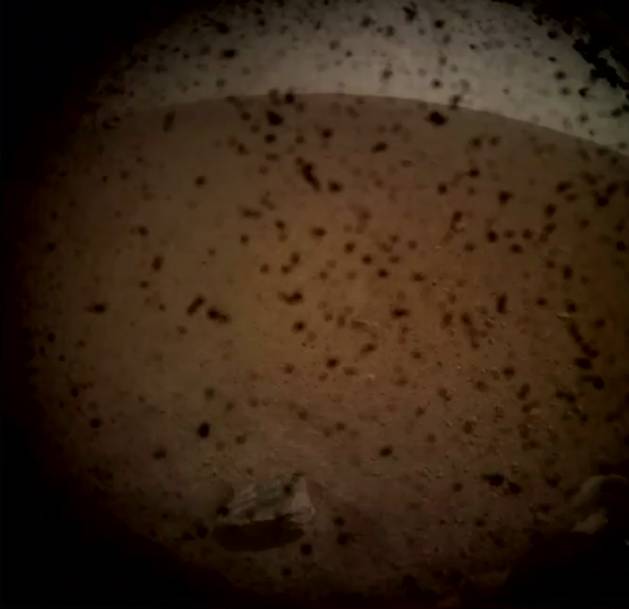 On the way down, the spacecraft fired its rockets to control its dramatic plunge. At one point, it descended through the atmosphere at a speed of 12,300 MPH, compressing the surrounding gas, and generating temperatures up to 2,700 degrees Fahrenheit or 1,500 degrees Celsius. Its heat shield was positioned precisely to prevent itself from melting.

When the craft was a good distance away from the surface, a parachute 12 metres in diameter deployed at a supersonic speed. The heat shield was also dumped. Radar pulses were continuously emitted to measure how far it was away from the ground. At the right moment, InSight stretched out its legs to absorb any shock as it set itself down on the rocky ground.

You can watch a replay of the landing here:

NASA’s mission is the first to study and map the interior structure of the Red Planet. “We know a lot of about its surface, its atmosphere and ionosphere, but not a lot about the first two miles of Mars' crust,” the scientists said.

A series of instruments, including a drill that can bury down several feet, will be used to measure the internal temperature of Mars and the wobble of its poles. The mission will help boffins understand the formation of rocky planets, and the Solar System as a whole, explained Bruce Banerdt, InSight's principal investigator.

“All rocky planets share the same basic structure: an iron core, rocky mantle, and a lighter crust of silica rock," he said. "The details like thickness and composition give clues to how they form and the different paths they took to form the planets we see today.”

But that’s not all. An on-board seismometer could also help future astronauts setting foot on the Red Planet. NASA administrator Jim Bridenstine said the device could detect how often Mars gets bombarded by asteroids. “If we’re going to send humans there, it’ll be useful to see how often it gets impacted.”

Now that the landing part is over, the team needs to check that the solar arrays have opened up sufficiently to get the spacecraft fully up and running. NASA's Odyssey probe, orbiting Mars, will be used later today to check that's the case. “We are solar powered, so getting the arrays out and operating is a big deal,” Hoffman said. “With the arrays providing the energy we need to start the cool science operations, we are well on our way to thoroughly investigate what’s inside of Mars for the very first time.” ®

More images have been beamed back – you can catch them, here.