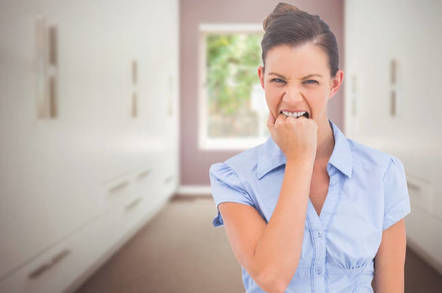 With just two years to go until the end of the Brexit transition period, HMRC has said its preparations for a Northern Ireland backstop could take up to 30 months – once Whitehall has said how the mechanism will work.

Effectively, this means there is no definitive date on when it could be operational.

It is the latest in a long line of stark warnings from the UK's tax department that have consistently stated that, until it has something more concrete to go on, it is impossible to build the relevant systems.

The two permanent secretaries at the department, Jim Harra and Jon Thompson, were speaking to the Treasury Committee (PDF) this week, in what Thompson said was his 13th select committee appearance about Brexit.

Thompson revealed that building the systems required for the Northern Ireland backstop could take more than two years – but pointed out this was based on a series of assumptions.

"It is really difficult to answer that question," he said when asked if a backstop would be ready by December 2020, which is when the transition period is currently scheduled to end.

For a start, he said, the department needs further clarity "on what exactly is required in order for us to be able to work out what IT systems we would need to build".

After that, HMRC would need to know what EU IT systems and databases it still had access to. The Withdrawal Agreement provides for different systems to be shut off at different times, but a draft political declaration published yesterday aims to re-negotiate access once the transition period is over.

I will be pleasantly surprised if the political declaration, when it is completed, gives us that level of certainty.

Once the department has those two elements, it can specify the operations required and build IT systems to do it – at which point, "we would need businesses that are transacting towards Northern Ireland to adapt or amend their own systems".

"In broad terms, if we were to make a number of assumptions, we think it could be up to 30 months to do that work," he said – but the clock won't start ticking until the governments reach an agreement.

For other customs systems at the border – working under the assumption it would be asked to implement a Facilitated Customs Arrangement – Thompson said it would take 24 months. But again this comes with the same caveats.

Harra added that, while an operational version of the Facilitated Customs Arrangement, for example, could be ready in 24 months, a repayment mechanism for businesses that overpaid would take longer.

On the time frame, Harra said it was unlikely that the completion of the political declaration on the future relationship, which was updated yesterday after a series of leaks, would be enough. That document (PDF), which runs to 26 pages, makes references to customs cooperation, but provided no specific details.

"I will be pleasantly surprised if the political declaration, when it is completed, gives us that level of certainty," he said. "In a Facilitated Customs Arrangement there is quite a lot to be agreed with the EU, which I would expect us to have to do in the next phase of the negotiation."

He effectively concluded there would be no choice but to proceed on the basis of some risk – which means there is "a chance that we will make the wrong assumptions and, therefore, we will have to redo some work".

Thompson repeatedly emphasised that readiness wasn't just down to the civil service.

"Even if we say we are clear about what needs to be operationalised, this is a highly automated system in which a whole range of other people then need to change their own systems," he said. "Traders, haulage companies, ports, airports and so on that need to adapt their own systems to what it is that we are saying they need to do".

If the government decide that they want to introduce an inventory linked system that requires ports and the ferry operators to introduce some new technology so that we know what lorries are crossing Dover Strait, so that when they enter the United Kingdom we can decide which ones to stop – that is a plausible scenario – that requires other people to build IT systems, to purchase IT systems or amend IT systems. That will take some time. It will not necessarily be about HMRC.

Finally, on the prospect of a no-deal Brexit, Harra reiterated previous comments that HMRC has plans in place and could have a functioning customs border on 30 March 2019 – but this would come at a cost, quite literally.

"We know the priority is to keep trade flowing and that fiscal risks may have to increase over the short term to enable that," he said.

"Therefore, the arrangements we will have in place will be suboptimal. They will not give us the level of assurance of taxes we would want to have and we would have to build on them over time. However, we recognise – because the priority is to keep trade flowing – that is what we will have to do."

He added that the compromises made on border control systems would be on financial, rather than security and safety risks. ®