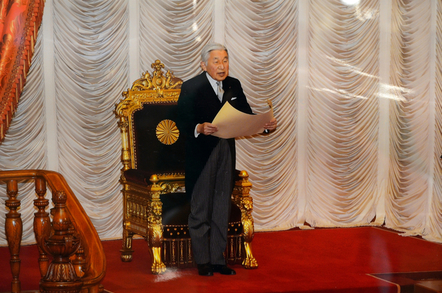 Emperor Akihito: I hereby declare... did you print this in Office?
Pic: Attila Jandi/Shutterstock

Stop us if you've heard this one, but Microsoft has pulled a couple of buggy patches in Office. It also left a crash-worthy Outlook security fix in place.

The two non-security patches were part of this month's Patch Tuesday, both for Office 2010. The patches in question were supposed to support Japan's upcoming epochal turnover.

Last year, Japanese Emperor Akihito announced that he would abdicate in favour of his son, Naruhito. As Microsoft explained in this blog post, that will bring the "Heisei era"* to a close, something that's never happened "in the history of .NET" – meaning a calendar transition would be needed.

Microsoft laudably decided to get ready early, and predictably, mishandled its first attempt, so it has pulled KB 4461522 and KB 2863821.

In both cases, the patches caused application crashes:

After you install this update, you may experience crashes in Microsoft Access or other applications. To resolve this issue, uninstall the update by following the instructions in the "More information" section.

Microsoft's knowledge base post warned that if the 64-bit version of that patch has been installed, Outlook might crash on start-up.

Rather than withdraw the patch, Redmond said it's researching the problem – a hint, perhaps, at the seriousness of the vulnerability. ®

* which started on 8 January 1989, the day after the death of the Emperor Hirohito and the ascension of Akihito.