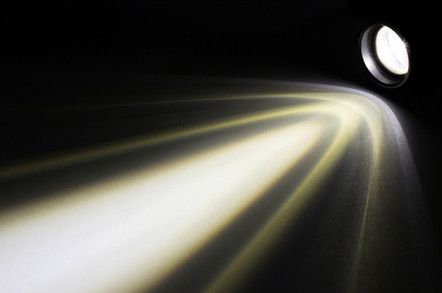 Roundup This week Microsoft saw the light in Windows 10 and returned to the realm of chatbots, among plenty of other things notwithstanding the flashing of a surprise ad in an Insider build.

Windows 10 goes into the light

As the Windows 10 October 2018 Update finally made an appearance last week, Microsoft was keen to keep the whole "business as usual" façade going with its desktop operating system unit by flinging out a fresh Insider build of 2019's Windows 10.

There was also that whole drive letter bug in 1809, but we did say it was "business as usual".

Build 18282 made an appearance hot on the heels of 1809 last week and while it remains blissfully free of any huge, exciting feature to whip the faithful into a frenzy, it did introduce functionality to delight those not keen on the sombre tones of Dark Mode.

A little confusingly, the new Light Mode option won't take effect until selected (perhaps this means that there will be a mode sitting between Dark and Light – we'd suggest "Murky").

The reason, according to Microsoft, is "we want everything to be exactly as you left it before you did the update".

You can insert your own file deletion joke here.

In use, however, light mode is a considerable improvement (at least to this hack's eyes), with the taskbar, start menu and action centre all being spruced up as well as much of the system user interface.

Other than Light Mode, there is little new in this release other than the usual very minor tweaks and fixes. As Microsoft prepares its army of unpaid testers for another Bug Bash in January, a swathe of fixes is really what the company should be focusing on.

While other bits of Azure are having a less than stellar start to this week, last week September's public preview of the Azure Sphere Operating system got its first update.

The 18.11 update for Microsoft's IoT pitch gains some very welcome features, most notably support for a battery-backed Real Time Clock to keep things ticking over when the power drops out, and tweaks to allow devices that haven't called home for a while to reconnect for updates, even with expired root certificates.

Microsoft has also updated the API to allow access to up to 64k of persistent storage on the devices as well as supporting connections to a private Ethernet 10Mpbs network via the serial peripheral interface of the MediaTek MT3620 MCU.

Finally, for those not keen on having to use a PC to configure the Wi-Fi on Azure Sphere devices (not ideal in the field, to be honest), Microsoft has also added a reference design for Bluetooth to allow the things to be set up with just a mobile app and suitable handheld.

Microsoft continued tinkering with its Visual Studio Core editor with a very, very preview release of support for Razor files in the editor's C# extension. While no real programmer would ever admit to depending on Intellisense and its ilk, getting C# completions and the wavy red line of stupidity in the .chtml files of Razor is a boon to this humble hack at least.

Things are still very much in the preview stage – the tooling gets awfully confused after a C# < operator and gives up HTML completions altogether for the rest of the line and, of course, only ASP.NET Core is supported.

Tag helper completions and Intellisense is next on the menu for the team along with, eventually, support for Blazor.

The Bots are a-coming, for an undisclosed price

We at The Register are big fans of Microsoft's bot efforts, and remember fondly the arrival, and subsequent trollification, of Tay a few short years ago.

Despite the experience, Microsoft has continued to push ahead in the arena of chatty AIs with an eye on productivity and to that end snapped up bot maker and conversational AI specialist XOXCO last week.

XOXCO, according to Microsoft, created the first commercially available bot for Slack able to schedule meetings in the form of Howdy and is also responsible for Botkit, a framework of development tools for those keen to inflict bots on the world.

Redmond has remained tight-lipped on how much it paid for the Texas-based outfit, nor what it actually intends to do with the technology. There was also no mention whatsoever of its in-house AI, Cortana, in the announcement.

Lili Cheng, Microsoft's corporate VP of conversational AI, listed the contents of the software giant's shopping basket over the last six months, which include AI luminaries such as Semantic Machines, Bonsai and Lobe before breathlessly stating: "Microsoft is infusing intelligence across all its products and services to extend individuals' and organizations' capabilities and make them more productive." ®