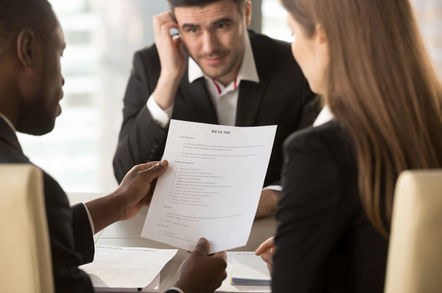 Who, Me? Roll up, roll up, for another instalment of Who, Me?, the weekly column in which El Reg tries to cure the very worst cases of Monday blues with fist-biting tales from readers of tech jobs gone wrong.

This week, "Ricky" and his employer prove just how much some people hate the arduous recruitment process, to the extent that they'll simply stick with what they've got – no matter how unsuitable.

Back in the late '90s, Ricky was working as a contractor doing network and desktop support, but was trying to move from first-line support to something "with less direct contact with users".

He managed to bag a six-month stint at a well-known car recovery biz doing second-line network support at their control centre, after what he described as a "very perfunctory" interview.

"I think they had already decided to give me the job based on my CV," Ricky told us – which turned out to be a bit of a problem for both parties, as the recruitment agent had decided to make a rather substantial tweak to his details.

"They had decided to add two years of Novell NetWare Administration experience to my CV," Ricky said.

"That was a slight issue, as the company's network was 100 per cent NetWare and my skills were 100 per cent Microsoft."

Ricky decided to 'fess up to the boss, but the top dog kept him on, dropping a huge NetWare manual on his desk along with the advice to ask if he needed help.

"Everything went OK on the first day," Ricky said. "The second day I got to the office at 9am and was asked to add a printer to the network. I fired up NetWare Administrator and got started."

Urging himself not to panic, Ricky dragged the Users folder back to the root of the admin tree; it returned to its original location and seemed to have the same contents, so he breathed a sigh of relief.

"Then the phones started ringing," Ricky said. "No one in the control centre could log into the network that morning for two hours, until it was fixed with a restore. Even more buttock clenching was that no one in the chairman's office could log in either."

The Microsoft man went to his boss's office to face the music – but somehow kept the job, which he suspects was a case of his higher-up wanting to keep the hiring error on the down-low.

"I'm pretty sure it was because my boss didn't want to explain why I had been given sysadmin rights on day one with no experience," Ricky said. "By mutual agreement I moved to doing desktop and hardware support for the remainder of that contract."

Have you ever embellished your CV and paid the price? Did your last recruitment programme end in near-disaster? Tell Who, Me? about it and ease the pain. ®