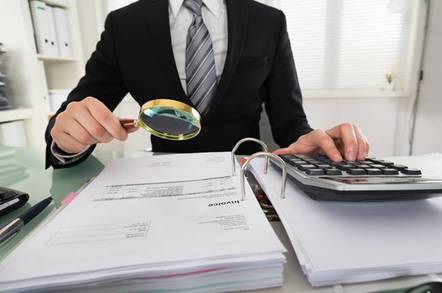 The complaint [PDF], filed last week in a US district court, names Symantec Corporation along with CEO Greg Clark, CFO Nick Noviello, and former accounting head Mark Garfield as defendants. The lawsuit was brought by a bloke called James Felix on behalf of everyone who purchased Symantec shares between May 11, 2017 and August 2, 2018.

During that time, the complaint alleges, Symantec bigwigs violated federal securities laws by fudging quarterly revenue numbers in order to protect their own bonus payments.

The case relates to the internal investigation that Symantec kicked off in May of this year. Shortly after word of the probe into its accounting emerged, Symantec stock dropped 10 per cent.

Symantec eventually concluded it would have to defer about $12m in revenues, and admitted to violations of its code of conduct.

This is what the lawsuit, filed in San Francisco, seeks compensation for, alleging the company and its executives were liable for the money shareholders lost as a result of the investigation causing stock prices to fall.

"When a whistleblower revealed Defendants’ deceptive accounting practices, the Company’s Audit Committee and the SEC launched investigations," the complaint stated. "With this news and the later disclosure of the results of the Audit Committee investigation, Symantec’s stock price plunged, causing investors to suffer substantial damages."

The lawsuit claimed that investors were illegally lied to by executives concerning the restructuring costs Symantec was incurring earlier this year as it moved to integrate its acquisitions, namely Blue Coat and LifeLock.

Looking to protect their own performance bonuses, the complaint alleged, the Symantec execs fudged the numbers on the quarterly reports to overstate figures in certain quarters, allowing them to protect and claim their performance-linked payouts.

"Defendants’ manipulations of those metrics allowed them to exceed their 2017 executive compensation plan targets," the complaint stated. "Defendants Clark and Noviello obtained nearly $52.1 million in equity awards and will receive nearly $4 million more based on their purported achievement of non-GAAP compensation metrics."

The allegations of fudged financial figures stem from claims made by a former veep and chief security officer (CSO) at Symantec, who is quoted anonymously in the lawsuit. For example, it was claimed sales numbers were shifted into adjacent quarters to ensure future as well as current targets would be hit:

Clark would regularly talk about opportunities from having been at Blue Coat prior to the acquisition, and the opportunity to be flexible in how they were spreading out revenue over time for these big and expensive hardware purchases. According to Symantec’s former VP and CSO, they had the ability to “massage” that.

Symantec’s former VP and CSO further explained that Clark talked frequently about their ability to manipulate or adjust revenue by various periods or a year. The intimation was that if they had already made their target for a particular quarter, then they would not deliver and record revenue until the next quarter.

Clark’s views on “opportunities” to be “flexible” with respect to revenue recognition were not a secret.

Now, Felix, or at least the lawyers representing him and other shareholders, are asking for a trial to determine damages.

A spokesperson for Symantec told us: "This lawsuit, which we believe is without merit and which we intend to defend against vigorously, was initially filed after the company announced the audit committee investigation in May 2018.

"The audit committee conducted a thorough investigation and concluded its investigation on September 24, 2018, as previously announced. The company has filed its FY18 10K and as well as its FY19 First Quarter and Second Quarter 10Qs with the SEC. Symantec is now current in its financials and in full compliance with Nasdaq listing Rules." ®

Sprinkles its Enterprise Cloud Platform with the SUSE juice

While on his way to the clink, IT consultancy big cheese will cough up that $2.9m he embezzled

Well, if you can't beat rivals at public cloud, advise....