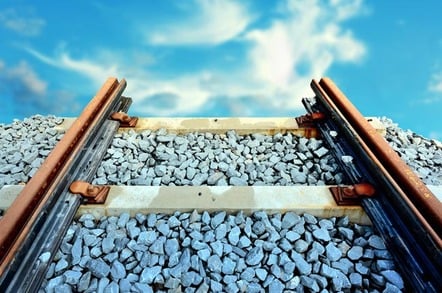 As if its financial woes weren't bad enough, IBM is suffering the further indignity of having a Scottish rail operator halting services to a station named after everyone's favourite mainframe maker.

Scotrail has announced that IBM Halt station, a single platform stop on a sleepy country branch line running past Greenock, west of Glasgow, will no longer be served by its trains from 9 December.

"The last IBM staff at Spango Valley moved out in September 2016 and there is no other commercial activity there," reported local news site Inverclyde Now.

The little station was originally opened in 1978 to serve IBM's once-sprawling outpost in Greenock, Scotland. Once providing gainful employment for thousands of people, the site's long-term fate was sealed when IBM offloaded its System x business to Lenovo, with production rolling off to the Far East in due course.

Despite the eventual total withdrawal of IBM and later Lenovo from Greenock, the little railway stop where a train could, er, Halt continued to proudly bear Big Blue’s name, as a lasting memorial to IBM's once-monolithic presence in the area.

However, with no major local activity nearby, the station's usage went off the rails, with open-source figures revealing that patronage dropped from more than 100,000 annually to fewer than 6,000 over a five-year period.

A Scotrail spokesman told us: "Trains will no longer call at IBM Halt station from 9 December 2018. This has been agreed with Transport Scotland and key stakeholders and partners along the route. The closest alternative stations are Inverkip and Branchton. Our current timetable will remain largely unchanged and there will be time between the stations before and after IBM Halt that would allow trains to call again at the station should the IBM site be redeveloped."

Inverclyde Now also published a rather depressing photo feature a couple of years ago, showing the state of its former Spango Valley site – which is now seemingly ripe for the film crew of a post-apocalyptic sci-fi drama to set up shop. It could be a sleeper hit. Chu-chu-choose your words wisely and help us finish that train of thought in the comments section below. ®

Video Workers of the world, you have nothing to lose but your train seats

How to make the trains run on time? Satellites. That's how

India and Europe exploring remote sensing to track trains, rather than terrestrial sensors