Microsoft slips ads into Windows 10 Mail client – then U-turns so hard, it warps fabric of reality 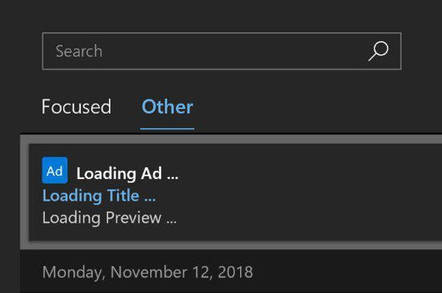 Microsoft was, and maybe still is, considering injecting targeted adverts into the Windows 10 Mail app.

For a few, er, lucky folks, ads would appear at the top of their inboxes, they were using the client without a paid-for Office 365 subscription. The advertising would be tailored to their interests. Revenues from the banners were intended to help keep Microsoft afloat, which banked just $16bn in profit in its latest financial year.

According to Aggiornamenti Lumia on Friday, beta testers using Windows Insider fast-track builds of Mail and Calendar, specifically version 11605.11029.20059.0, may have seen the ads this month in among their messages, depending on their location. Users in Brazil, Canada, Australia, and India were chosen as guinea pigs for this experiment.

Bad news: Mail for #Windows10 is getting ads for non-office 365 subscribers! https://t.co/xDELzAClJq pic.twitter.com/gXkQXab5Wr

A now-deleted FAQ on the Office.com website about the "feature" explained the advertising space would be sold off to help Microsoft "provide, support, and improve some of our products," just like Gmail and Yahoo! Mail display ads.

Also, the advertising is targeted, by monitoring what you get up to with apps and web browsing, and using demographic information you disclose:

Microsoft does not use your personal information, like the content of your email, calendar, or contacts, to target you for ads. We do not use the content in your mailbox or in the Mail app.

You can also close an ad banner by clicking on its trash can icon, or get rid of them completely by coughing up cash:

You can permanently remove ads by buying an Office 365 Home or Office 365 Personal subscription.

Here's where reality is thrown into a spin, literally. Microsoft PR supremo Frank Shaw said a few hours ago, after the ads were spotted:

This was an experimental feature that was never intended to be tested broadly and it is being turned off.

Never intended to be tested broadly, and was shut down immediately, yet until it was clocked, had an official FAQ for it on Office.com, which was also hastily nuked from orbit, and was rolled out in highly populated nations. Talk about hand caught in the cookie jar.

And there's no denying they will ever come back; just that they're going away for now at least from Mail and Calendar. It may be that the ads appeared outside the intended sandbox of Brazil, India, etc, or even outside the Windows Insider program, forcing Microsoft to pull the plug.

Still, it sounds to us as though it was intended to be tested relatively broadly.

In any case, Redmond is or was mulling extracting revenue from people one way or another, either via Office subs or advertising, which is to be expected. It should be no surprise, just like knowing Facebook puts its own interests and profits ahead of its addicts should be no great shock. Redmond has been squeezing little adverts into its operating system for a few years now.

Injecting adverts into a desktop email client may be a little too much for Microsoft's traditional users and loyalists to swallow, though. ®