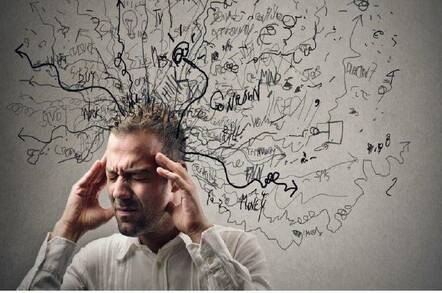 As incredible as it may seem, until this week the definitive measurement of a kilogram was a cylinder made of an alloy comprising 90 per cent platinum and 10 per cent iridium sat under a glass dome in a room in Paris.

The cylinder is one of six official exact masses of one kilogram, and it has been that way since 1889: The same year Adolf Hitler was born, the Eiffel Tower was built, and American President Grover Cleveland added North and South Dakota, Montana, and Washington to the United States. But in an age where we can communicate instantly with anyone in the world, and pull up all kinds of information immediately, and carry around what were once supercomputers in our pockets, it is time for an overhaul.

And so on Friday representatives from 60 countries voted in perhaps the biggest ever change to how we measure things on this planet. And it took place at a meeting of the General Conference on Weights and Measures, the same conference that established the kilogram more than 100 years ago, and in the same place, Versailles, just outside the French capital.

The vote redefined the kilogram, the SI base unit of mass, so that it is no longer derived from a unique object, one of the aforementioned shafts of alloy, and instead can be calculated from constants in nature like its fellow SI base units.

From metres of length to seconds of time, these fundamental units are defined using methods that can be, in theory, replicated anywhere – and their values are detailed here [PDF]. Take, for instance, the metre. This is defined as the distance traveled by light in a vacuum in a 299,792,458th of a second. The speed is constant, therefore the metre is constant. You don't have to rely on maintaining an ultra-accurate metre-long stick on which all other measuring equipment is based: you can derive the distance wherever you are without relying on a single artificial reference object.

Not so the kilogram, the SI base unit of mass, which, until now, was defined by a highly preserved physical cylinder.

Technically speaking, the conference voted to redefine four of the seven base units – the kilogram, ampere, kelvin, and mole – so that they are all based on constants. However, the kilogram is the significant headline-grabbing change, because it has been shackled to kooky cylinders held in glass containers for generations, whereas the other three could be measured in science experiments in any suitably equipped lab.

Anyway, now all seven SI base units – the kilogram, the kelvin, the ampere, the mole, the candela, the metre, and the second – can be defined from constants.

It's worth noting that all other SI units are derived from these base units: the volt, the ohm, etc – all of these famous ways of making sure the world is on the same page when it comes to everything from powering our homes to sharing pictures of our lunch on the internet.

As quaint as it is that we have a physical cylinder in a jar in Paris as a reference for everything we measure as mass, it's also a bit ridiculous. Billions of people can't travel to France every year to calibrate their kitchen scale.

So there are six official kilogram masses and, er, they are all different masses

Instead, the reference object is copied and transferred, copied and transferred, and everyone has their own version. And of course, it is not a perfect copying system; one kilogram in one part of the world is going to be slightly different to a kilogram in another part. Not only that, but the official physical kilograms have changed in mass over time, so there are now actually six different versions of what a kilogram is (if in doubt the original K1, known as Le Grand K, gets the nod).

In a world where we are making more and more precise measurements of everything, right down into the picograms and beyond, it makes sense to have a measurement that can be reproduced anywhere in the world and have the exact same end result. That's what the measurement nerds have done in voting to shift the International System of Units (SI) into the 21st century.

And so – from May 20, 2019 – those old platinum alloys will be on the scrapheap, figuratively speaking, and the kilogram will be measured using the Planck constant. This number links the frequency of a photon in a beam of light to its energy: the energy equals the constant multiplied by the photon's frequency. Using Einstein's E = mc2 formula, we can see a relationship developing between mass, in kg, and the Planck constant.

The Planck constant, named after the physicist Max Planck, is incredibly small (it's 6.62607015 x 10-34 Js), and is measured using a specialist piece of equipment called a Kibble balance, named after Brit boffin Bryan Kibble, and previously called a watt balance. Because the Kibble balance can measure the Planck constant so accurately, it should be possible to define a more or less perfect kilogram – that's a lot better than copying cylinders of alloy.

Interestingly, the new kilogram measurement actually relies on two other standard units that were updated relatively recently: the second was revised in 1983 to become something that is defined by radiation emissions from the caesium-133 atom; and the metre was redefined in 1960 as described above.

Just as knowing the speed of light in a vacuum is essential to calculating a metre, it is essential that scientists can precisely measure the Planck constant in order to define a damn-near perfect kilogram, hence the importance of the Kibble balance.

But we digress. What you really want to know is: how do I measure an absolutely exact, mind-blowingly precise single kilogram?

Buckle up, here we go

Well, first you need a good grasp of physics, and second you need to get your hands on one of the Kibble balances. Unfortunately Kibble balances are a) insanely expensive, b) the size of a small room, and hence c) only exist in around five special laboratories around the world. 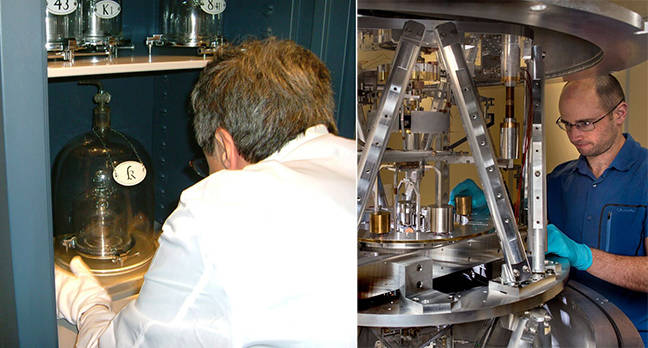 On the left "Le Grand K"; on the right, a Kibble balance. You can see why we stuck with the weight-in-a-jar approach for so long.

So let's concentrate on the physics. As we said, mass (m) is inherently linked to the Planck constant (h). If a Kibble balance uses an exactly defined mass to measure the unknown value of h, then the process can be reversed: by setting an exact fixed value of h, you can use it to measure an unknown amount of mass. And this is the logic behind what has become known as the "electronic kilogram" – soon to be just the kilogram.

You can read more about how all this was figured out and formally proposed by two NIST scientists – Peter Mohr and Barry Taylor – in a letter published in the Metrologia journal back in 1999.

And if that sounds incredibly complicated, now you know why it's taken nearly 130 years to get away from a metal block.

What about the others: the ampere, kelvin and mole? A similar sort of approach, with each defined by constants that can be accurately measured and so tracked back:

Which is, of course, all extremely clear and obvious and simple to grasp. And why we'll simply leave it to the super measurement nerds, and get back to our kitchen scales and multimeters in blissful ignorance knowing that at least someone out there is working hard on this. ®

More than 65m requests flood into Choc Factory in past month