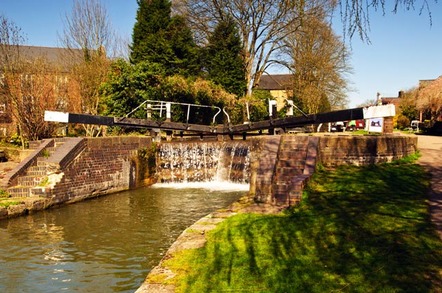 Not-spot horror: You see a bucolic canal lock in beautiful autumnal Hertfordshire, we see a festering pit of connectivity-lacking backwardness

Millions of Britons unwilling to be parted from their urban broadband and not-too-shabby mobile phone reception are shunning rural living, according to a survey.

Diary of a not-spot: Vulture hack vows, I will never pay BT again!

Just to really add insult to injury for the Great British Countryside and all who live in it, city dwellers who abandoned the rat race are apparently regretting their move precisely because of crap web speeds and phone signal. Or so says comparison site Uswitch.

Nine million Britons “won’t move to the countryside through fear of being cut off by poor broadband,” according to the site, which is extrapolating that figure out of a survey of 2,000 adults carried out in July by pollsters from Opinium. 17 per cent of those asked said they’d shun life outside their nearest metropolis over fears of poor connectivity.

“It’s ludicrous that in 2018 broadband and mobile phone signal is a factor influencing where in the UK people choose to live,” thundered Ernest Doku, of Uswitch. “In recent years there have been massive strides made in the rollout of superfast services and mobile reception provision, so it’s hard to imagine why so many people continue to struggle along on a service that doesn’t meet their needs.”

Ah well, we can't all be as heroic as former Reg scribe Bill Ray, who bravely balanced a microwave dish on top of a wooden horse, among other exploits, to bring broadband to his remote corner of the Highlands.

Just over half of the full survey amount (58 per cent) professed to be concerned about slow or unreliable broadband, coming second to crap transport links and relegating mobile phone not-spot fears to third place. A lack of public services in the countryside came a close-run fourth.

Nearly 80 per cent of those surveyed described their current abode as “urban” or “suburban”, however, so these figures ought to be taken with a pinch of salt. More than a third of the 20 per cent of non-town-dwellers surveyed said it was “unlikely” they would consider living in the countryside in the future, based on the connectivity or perceived lack thereof.

Answering a question nobody had asked, Doku’s canned statement went on to inform us all: “The only explanation is that providers have been guilty of a ‘build it and they will come’ mentality - simply assuming that their work is done as soon as they have provided the infrastructure for faster services and not doing enough to make sure that their customers are aware that better services are available.”

That’s you told, telcos. Don’t just build it and sell it, force it down people’s throats, ram it into their faces, go the full Clockwork Orange on the unthinking masses. Or something. ®

Western Digital develops a new soft spot for the hyper-converged world – a software spot, that is