Pick three people you think will replace Google Cloud CEO Greene, then forget them – because it's Thomas Kurian 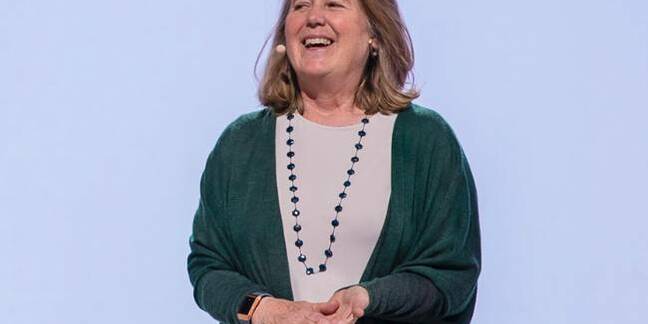 Diane Greene ... laughing all the way to the bank

Google Cloud CEO Diane Greene has quit the online ads giant, and will be replaced by ex-Oracle executive Thomas Kurian.

The handover of power will begin on November 26, it was announced today: that's when Kurian will join Google Cloud, and will take over fully in January. Greene will stay on as a director of Google parent Alphabet.

Google Cloud touts a bunch of stuff, from hosting virtual machines and containers to online databases and AI services. It is a distant third or fourth, tussling with IBM over that particular spot, behind Microsoft Azure and the runaway leader Amazon Web Services, in terms of cloud market share.

Greene, a VMware cofounder and former CEO, seized the wheel of Google Cloud in 2015 after the Silicon Valley giant bought her startup Bebop for roughly $400m. At the time, Google chief exec Sundar Pichai gushed:

We’re so excited that Diane Greene will lead a new team combining all our cloud businesses, including Google for Work, Cloud Platform, and Google Apps. This new business will bring together product, engineering, marketing and sales and allow us to operate in a much more integrated, coordinated fashion.

Well, fast forward to Friday this week, and we have Greene now spinning furiously:

When I joined Google full-time to run Cloud in December 2015, I told my family and friends that it would be for two years.

Ouch. Greene seems chuffed she made it to three years, and with tens of millions of Google bucks pocketed, she wants to move onto something much more worthwhile:

Now, after an unbelievably stimulating and productive three years, it’s time to turn to the passions I’ve long had around mentoring and education.

The mentoring will include investing in and helping female founder CEOs who have engineering or science backgrounds. I want to encourage every woman engineer and scientist to think in terms of building their own company someday. The world will be a better place with more female founder CEOs.

This comes amid Google somewhat drowning in allegations of sexism and harassment of women workers, with staff walking out in protest of management's poor handling of sex pests and assaults.

And then there was the outrage over her controversial push to sell AI technology to the US military to power killer drones, and the failure to bid for the Pentagon's $10bn JEDI cloud contract for various awkward reasons. All, it seems, added up to her sudden departure.

Greene, already post-economic thanks to cofounding VMware, has better, and less hostile, places to be, it seems.

Still, she had nice things to say about her cloud business, praising her employees for having "accomplished amazing things" during her reign. Said amazing things did not include their inability to overtake Azure or AWS, we note.

And stepping up to the plate is Thomas Kurian, brother of NetApp boss George. Thomas's arrival at Google is a somewhat surprising development. We had assumed he would be taking a break after ejecting out of Oracle at the end of September.

Kurian was the database giant's cloud supremo, and oversaw much of its product development. He seems to be a natural fit for Google Cloud: as an experienced enterprise IT vendor executive, he follows in the footsteps of industry veteran Greene in trying to smarten up Google Cloud so it can compete against Azure and AWS for business.

Google Cloud is home to some trendy outfits, such as Spotify and SnapChat, plus games developers, and the likes of Home Depot, which don't want to use AWS because Amazon is a fierce competitor.

Having said that, Kurian bailed out just as Oracle's crucial cloud segments started to stagnate, and dark skies gathered over the IT giant. The corporation's cloud platform was also far behind AWS, Azure, IBM, and Google in terms of market share. And Oracle was criticized for merging its cloud and on-premises sales in its financial figures, as if it were obfuscating its progress in markets deemed vital to its future.

On the other hand, Google has also come under fire for not breaking down its cloud revenues in detail in its financial figures, so perhaps Kurian will be a natural fit at the advertising titan, after all. ®