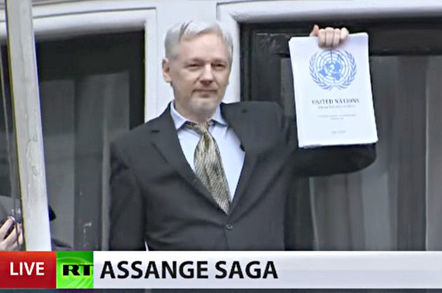 Assange, as featured by the Russia Today propaganda TV network

In what appears to be a unrelated case filed in a Virginia district court against someone accused of child molestation, a motion to seal that case – the American legal term for making court documents a secret from the public – veers into unrelated territory about Assange.

The stated purpose of sealing documents in criminal cases is to stop defendants from doing things like destroying evidence before arrest, or fleeing the country.

In the part of the document where prosecutors explain why it was necessary to seal the court case documents, they mention Assange – who has seemingly been charged under seal – without providing any context.

"Another procedure short of sealing will not adequately protect the needs of law enforcement at this time because, due to the sophistication of the defendant and the publicity surrounding the case, no other procedure is likely to keep confidential the fact that Assange has been charged," states the document (PDF, 2 pages).

One of Assange's lawyers told The Guardian newspaper that the suggestion his client had been charged with a crime was troubling.

"The news that criminal charges have apparently been filed against Mr Assange is even more troubling than the haphazard manner in which that information has been revealed," Barry Pollack told the paper, which noted that the document had been filed in the US District Court for the Eastern District of Virginia, "which handles many cases involving national security".

The information first came to light when it was highlighted in the unsealed case filing and then tweeted by former senior Senate counterterrorism advisor Seamus Hughes, who opined in a later tweet that he thought it had been a "Freudian" typo by a court that has "Assange on [its] mind".

The WikiLeaker has been hiding in Ecuador's London embassy for more than six years over fears that his state secrets-blabbing website WikiLeaks had enraged the American establishment to the point that it would try to prosecute him. Notable WikiLeaks leaks include the infamous "Collateral Murder" video, which showed American Apache attack helicopter pilots blazing away at groups of armed Iraqi men that happened to include war correspondents for Reuters, as well as a trove of 700,000 US diplomatic cables revealing that country's government's innermost thinking about sensitive diplomatic topics.

In October Assange sued Ecuador after the country gave him a set of ground rules for living in the embassy that will look familiar to any parent of teenage children – including a requirement to properly look after his cat*. An Ecuadorian court tossed out his attempt to continue apparently living like a slob.

The Australian's self-imposed exile in the Ecuadorian embassy is because the country offered him asylum when it looked likely that Sweden would indict him over allegations of sexual assault, which Assange believed was a pretext to spirit him off to America where he would potentially face espionage charges. ®

* The story went around that the cat was a gift to Jules from his kids. New Yorker magazine, however, reported an anonymous source as saying that Assange named it Michi, "which is Ecuadorean Spanish for cat", having spent half an hour staring at it and trying to work out a PR strategy that made the cat reflect well on him.

Unsurprisingly, embassy officials told Jules that either he starts taking proper care of the poor creature or they will take it to a cat shelter for rehoming.