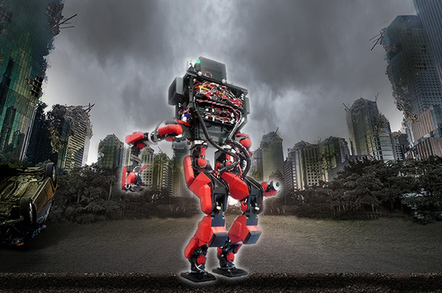 Google's parent company Alphabet has closed down its biped robot maker Schaft after failing to find a buyer.

Even the singularity-obsessed panic buyer SoftBank, which had made a commitment to buy the company last year, wasn't interested. Talks broke down, Nikkei reported this week.

Schaft was a spinout from the University of Tokyo, acquired in 2013 when Google went on a spending spree under the direction of disgraced former executive Andy Rubin. Rubin acquired seven robotics companies including Boston Dynamics.

As the IEEE's Spectrum noted, once Google was involved, a shroud of secrecy descended on our two-legged friend.

"After the Google acquisition, it completely clammed up. At the DRC [DARPA] Trials, the team refused to speak to the media and tried to keep photographers away from its robot. Even information previously available on its website has now been deleted."

Schaft won four categories in the 2014 trials: crossing rubble, climbing ladders, clearing debris and using a hose (all tasks likely to be beyond the capability of a Google executive).

The robots from Schaft and Boston Dynamics often feature in terrifying promotional videos, but the robots are actually either tethered, or human-controlled machines. They're experiments in replicating animal physiology, rather than self-directed autonomy. Few mainstream journalists are able to make that distinction. ®