OpenStack: We've seen the future, and it's metal (and infrastructure, natch)

No need to learn Mandarin, we collaborate in English 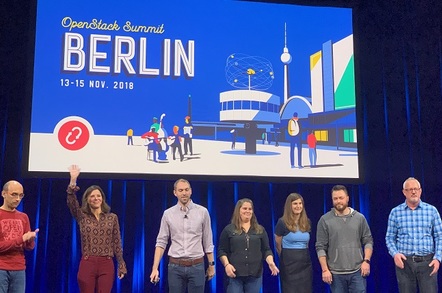 With its roots in a joint project set up by NASA and Rackspace back in 2010, the open-source OpenStack platform comprises a suite of components aimed at managing pools of compute, storage and networking resources for those wary of throwing their lot in with the likes of Amazon and Microsoft.

Over two days of keynote speeches in which the OpenStack Foundation (OSF) wheeled out a succession of customers to insist the framework was a breeze to set up and not just for telcos, there was a tacit admission that perhaps it was time for the group to focus a bit more on the whole infrastructure thing. And China.

It's (mostly) about Infrastructure, OK?

Speaking to a cavernous auditorium filled with attendees over two days, the OSF's executive director, Jonathan Bryce, extolled the benefits of open source, as one might expect, before admitting that the VM world for which OpenStack was known was converging with that of containers, as Kubernetes continued its march.

While Bryce was at pains to make it clear that the group was not running away from the collection of tools that form its cloud platform, he reckoned an IT infrastructure stack built of open-source components would ensure users avoided vendor lock-in and could innovate rapidly.

Founder of Canonical and self-confessed "thorn in the side" of the OSF Mark Shuttleworth agreed, telling The Register that the concept of Open Infrastructure was right but cautioned that the OSF needed to be focused on what actually needs to work.

In case anyone was left in any doubt about that focus, the OSF announced the next summit, in Denver, would be branded "Open Infrastructure".

The OpenStack project clocked up 70,000 commits in the last year and 182 changes per day for the latest release, Rocky. Significantly, the second biggest contributor to the project is China, where the platform dominates. The OSF produced research showing that four out of five private cloud vendors in the People's Republic are OpenStack-based.

Recognising the importance of China, the OSF announced that the country would be hosting a summit towards the end of 2019.

For vendors, China presents an interesting challenge. Boris Renski of Mirantis told El Reg monetising the platform there was difficult. Renski ruefully told us that the vast majority of downloads of Mirantis's implementation came from China, but selling the all-important associated services that pay for the work of Mirantis's engineers into the People's Republic was trickier.

The OSF, on the other hand, is keen to emphasise its collaborative chops, with 187 countries represented in its ranks. Its chair, Alan Clark, told us the key is transparent communication and collaboration tools that aren't tied up by regional regulations. So yes, there's quite a bit of English text on mailing lists.

The OSF also flagged up four new projects that were coming to the end of their respective pilots.

These comprised Airship, a collection of tools aimed at automating cloud provisioning went to release candidate status this week; Kata, a bridge from OpenStack's VM roots to a container future via secure, lightweight VMs; StarlingX, which takes WindRiver's freshly open-sourced Titanium R5 platform to give OpenStack a cloud for distributed edge applications; and finally Zuul, a CI/CD platform.

The Big Blue elephant in the room

The OSF managed to avoid referring to the acquisition of OpenStack supporters, Red Hat, by services giant IBM during the first keynote. As for the famously behatted open-source specialist itself, it was business as usual as senior director for OpenStack Product Management Nick Barcet announced the company's OpenStack Platform 14 was due in a few weeks before calling for the OSF to up the cadence of its releases.

At the moment, OpenStack performs a new release twice a year. For Barcet, four times a year would be better. Just like Kubernetes, which has shipped a new release approximately every three months since 2016. Such a move would allow new features to reach users faster.

It wasn't until the second day of keynotes that RedHat's fate got a mention, as Canonical's Mark Shuttleworth took to the stage to poke a little fun at the deal by expressing his surprise at the level of debt taken on by IBM for the acquisition before extolling the virtues of Ubuntu in the OpenStack world.

As for the future, Julia Kreger, the OpenStack Ironic Project Team Leader, highlighted an increasing need for bare metal clouds, shorn of virtualized fripperies as demands from AI and machine learning applications increased.

The OSF wrapped up by announcing that next year's OpenStack, following the Stein release due in the first half of the year, would be called Train. All aboard. ®