FCC signs off on broadband-in-space plans, plus connections to Europe's GPS 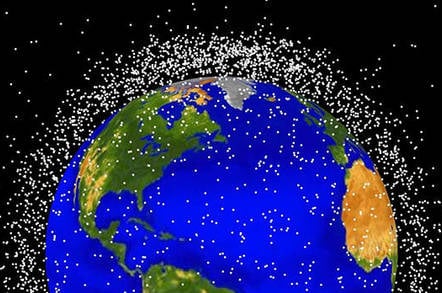 This effectively gives the green light to the launch of tens of thousands of mini-satellites that will operate in low orbit and mesh together to form next-generation communications networks.

Among the recipients of the expansion is SpaceX and its Starlink program, which plans to blanket the globe with 12,000 satellites and offer internet access to rural areas that are currently under-served. SpaceX already had a thumbs up to launch 4,400 birds; now it can send up a further 7,500.

UK getting ready to go it alone on Galileo

Starlink faces significant competition from three other companies that also received FCC approval this morning. Kepler, Telesat, and Leosat will also launch their own satellite fleets in order to expand telecom networks in space. Again, the plan is to beam down internet connectivity to folks out in the sticks using constellations of orbiting birds. Kepler plans to send up 140, Telesat 117, and Leosat 78.

FCC Commissioner Brendan Carr said the approval was the US government adding "another tool in the broadband toolbox"; one that would offer "lower latency connections" because the mini-satellites will orbit only a few hundred miles about the Earth's surface rather than a few thousand.

Carr made it plain however that the regulator didn't know what was going to happen in this new market. "We are not picking winners and losers in a competition to provide more broadband to more Americans," he said, adding: "We let these companies move forward and allow the market to decide their success."

In addition to approving a massive expansion in the number of satellites orbiting the Earth, the FCC also approved the use of Europe's Galileo GPS system for US devices, in addition to the American GPS system.

By using both systems, gadgets – including billions of smart phones – should become a little more accurate and resilient as they will have more points of reference. The reality is that many modern devices already use the Galileo system, and the FCC has just made it official by approving the use of Europe's E1 and E5 signals. It did not approve use of its E6 signal however as that operates in the 1260-1300 MHz frequency band, and that has not been allocated for radio satellite signals in the US.

Who you jivin' with that Cosmik Debris?

Also, allowing these meshes of communications satellites to use both GPS systems should help deal with the biggest concern that people have with the launch of tens of thousands of new pieces of metal into orbit: space debris.

As the movie Gravity graphically demonstrated, the impact of even a tiny piece of trash with something powering through the atmosphere can be catastrophic, and could lead to the creation of thousands of more piece of debris, creating a chain reaction that could make Earth's orbit a no-go zone.

There are, right now, just over 1,000 satellites orbiting the planet. As such, today's approval would vastly increase that figure, and so massively increase the risk of collisions. That said, according to the United States Space Surveillance Network, there are 21,000 objects larger than 10cm orbiting the Earth, and a further 500,000 objects between 1cm and 10cm.

Unsurprisingly, this is something that lots of people take very seriously. And so as part of its approval of the new web of satellites, the FCC approved a review of its space debris policy – which was last looked at in 2004 – to see what changes may need to be made to make this next-generation of networks as safe as possible.

It may be that the American and European GPS systems can be tapped up by the tiny comms satellites to position themselves exactly where they should be, and hopefully avoid any space prangs.

"I'm excited to see what these services might promise and what these proposed constellations have to offer," said FCC chair Ajit Pai. "Our approach to these applications reflects this commission’s fundamental approach to encourage the private sector to invest and to innovate and allow market forces to deliver value to American consumers."

It will be years until all the satellites are up and working. And it's not just the US looking to coat the globe in small satellites. This week, in a clear sign that will also be providing competition, China announced it will launch the first of 320 satellites for low Earth orbit before the end of the year. ®