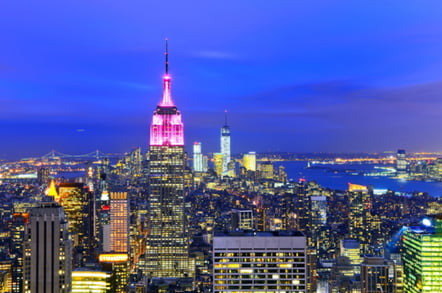 The Empire State Building was lit up last night in celebration of the tax-efficient online marketplace deigning to set up half of its much-hyped new headquarters in the city.

Following the announcement, the landmark sent out a quite frankly vomit-inducing tweet saying it was glowing white with "an hourly orange sparkle".

We’re celebrating @Amazon’s announcement of HQ2 coming to #NewYorkCity by glowing in white with an hourly orange sparkle! pic.twitter.com/a2cKhl3ZJ9

Although there was perhaps relief it hadn't turned orange to celebrate Trump, the move was quickly rounded on by New Yorkers complaining about the impact Amazon's arrival would have on the Subway, house prices and more, while Seattle residents (where Amazon has its main HQ) sympathised for their loss.

I feel your pain NYC, amazon has changed my beloved city of Seattle so much, the cost of living here is getting to be as outrageous as San Francisco. Glad I bought my house 20 years ago.

Others simply suggested Empy had taken a step towards becoming the Dark Tower.

Sauron did it better. pic.twitter.com/TPEZt2Qu3G

The hunt for so-called HQ2 began last year, when Amazon decided to lie back and ask regional mayors to woo the giant through an open bidding process. The move was at the time lauded as a way of injecting investment and interest in regions beyond the usual suspects on either side of the US.

It garnered an avalanche of applications dangling tax breaks and various other incentives to get Bezos' team to set up shop there (according to The Guardian, New York governor Andrew Cuomo even pledged to "change my name to Amazon Cuomo if that's what it takes").

Later, when the field narrowed to 20 applicants, Amazon took a swerve to secrecy, requiring the cities involved to sign NDAs and keep schtum about the shortlist.

Yesterday it was revealed that Amazon bosses find it just as tough as cheating spouses to make a final decision, and opted for polyamory – the HQ2 will be split between New York and Washington. The middle states didn't get a look-in.

New York has promised Amazon a refundable tax credit, tied to job creation, of up to $1.2bn, and a $325m cash development grant tied to the square-footage it occupies over the next decade. Washington offered Amazon performance-based direct incentives of $573m, again based on job creation.

In return for their offers, Long Island City and Arlington will be showered with $2.5bn – some of which will go on infrastructure improvements – and 25,000 jobs each, not to mention rising rents for the rest of the population.

Amazon also announced an "Operations Centre of Excellence" in Nashville, Tennessee – possibly to demonstrate it wasn't all about the East Coast – where it promised to spend $230m and create 5,000 jobs, in exchange for cash grants of up to $102m. ®