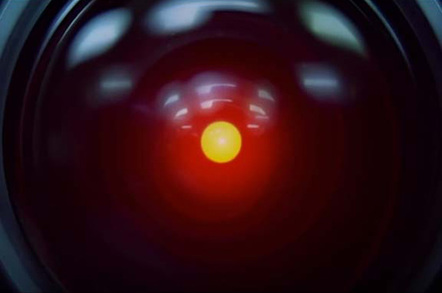 Canadian actor Douglas Rain has died at the age of 90.

Though hardly a household name, millions have been and continue to be haunted by Rain's cold monotone as the HAL 9000 computer in Stanley Kubrick's 1968 masterpiece, 2001: A Space Odyssey.

When polled, out of a choice of a whopping 42 quotes, nearly 5,000 Reg readers voted: "I'm sorry Dave, I'm afraid I can't do that", as their top sci-fi movie quote of all time. It narrowly nudged aside Roy Batty's somewhat overwrought "Time to die" monologue in 1982's Blade Runner.

The voice of the murderous machine was purposefully emotionless, belying the fact that it was a brilliant piece of acting. It's difficult to imagine it being quite as disturbing done in any other way.

Rain was much more than a computer voice, however. He was a highly regarded and respected member of the Canadian theatre who was not only a great actor but also went out of his way to organise countless events and festivals for the enjoyment of others.

His death was announced by one such event, Canada's Stratford Festival.

Today we lost Douglas Rain, a member of our founding company and a hugely esteemed presence on our stages for 32 seasons. He will be greatly missed. Our thoughts and prayers are with his family. pic.twitter.com/dxcffgGEiA

Rain's legacy is sure to reach far into the future. Not only did he perfect the AI-gone-rogue that has so enamoured the sci-fi world since, but the Siris, Cortanas and Alexas of today take a generous helping of cues from his unforgettable performance. Not to mention Scarlet Johanssen's Her, which proved it's not just Reg commenters who get emotional about OSes. And at this rate, we'll only be hearing more I-can't-do-thats from them as time goes by. ®

It's about 'the esoteric great architect Other', tweet reveals

Guess who reserved their seat on the first Moon flight? My mum, that's who

Something for the Weekend, Sir? Of course the ticket's real: it says 'Pan Am' at the top, doesn't it?