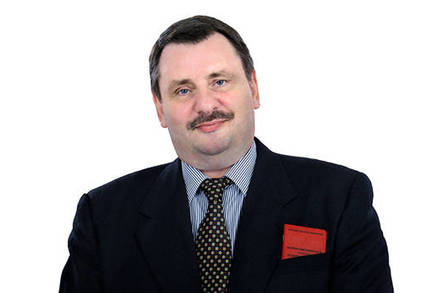 [ yeah just use smug_russian.jpg or something – ed. ]

The Russian government has denied having anything to do with hacking the US Democratic party in 2016, although in a court filing this week stressed that even if it did break into the DNC's servers, it is immune from prosecution.

And furthermore the Kremlin claimed America is "one of the most prolific practitioners of cyberattacks and cyber-intrusions on the planet." So, nerr!

"The [Foreign Sovereign Immunities Act] FSIA provides that foreign sovereign states enjoy absolute jurisdictional immunity from suit unless a plaintiff can demonstrate that one of the FSIA’s enumerated 'exceptions' applies," argued [PDF] the Russian government this week in a New York court in response to a lawsuit from the DNC.

The DNC claims that it was subject to a "military attack" by Kremlin intelligence, causing Russia to argue back that any act of its military is a sovereign action and so therefore it can't be sued for it.

It's an amazing defense though one the DNC foresaw. It argued in its initial court paperwork [PDF] that "Russia is not entitled to sovereign immunity because the DNC’s claims arise out of Russia’s trespass onto the DNC’s private servers - a tort allegedly committed in the United States.

"In addition, Russia committed the trespass in order to steal trade secrets and commit economic espionage, two forms of commercial activity undertaken in and directly affecting the United States."

Of course this being 2018 and Russia, the Putin administration can't leave it at that, and takes the opportunity to troll the US government by pointing out that the immunity provision is also heavily relied upon by Uncle Sam and its officials abroad.

"The United States benefits significantly from the sovereign immunity that it enjoys (and US officials enjoy) in foreign courts around the world with respect to the United States’ frequency acts of cyber intrusion and political interference," Russia's response reads. "As current and former US officials have acknowledged on many occasion, the United States - acting primarily through the National Security Agency (NSA) with the US Department of Defense - is one of the most prolific practitioners of cyberattacks and cyber-intrusions on the planet."

And Vlads' lads are not done with the trolling yet. Seemingly in response to the DNC lawsuit, which paints the hack as a conspiracy between the Trump campaign, Wikileaks, and the Russian government, their response thumbs its nose at the DNC for losing the election.

"These are State-to-State matters," it says. "The US Executive and US Congress are the proper actors to address this 'political question'… Significantly neither the Executive nor the US Congress has taken any steps to involve the Judicial Branch in their response. The US Congress has also resisted naive calls over the past decade to create a 'cyberattack' exception to the FISA."

The Russians are not the only trolls in this lawsuit. For some reason, US citizen David Andrew Christenson has taken it on himself to file numerous letters [PDF] to the court over this case, complaining about the DNC, in particular its decision to champion Hillary Clinton rather than Bernie Sanders as its presidential candidate.

Christenson who hails from – you guessed it – Florida, was informed repeatedly by the judge that he had nothing to do with the case, and should take his issues up elsewhere. But after more than 30 letters and having ignored two explicit orders from the judge to stop, the judge finally cut him off [PDF] and said the court wouldn't entertain any more of his conspiratorial ramblings.

The hack of the DNC's mail server became a major headache for Democrats during the hotly contested presidential election in 2016, with confidential emails leaked to Wikileaks and used to undermine and embarrass Clinton and her advisers.

An investigation into the cyber-intrusion, which dates back to 2015, revealed that the Kremlin was behind it, and by October 2016 the US government was formally accusing the Russians.

That was followed in July 2018 by a formal indictment against 12 Russian spies who the US Department of Justice named and said worked for Russia's GRU military intelligence agency. They were charged with conspiracy, money laundering, and identity theft.

Two months before that indictment, however, the DNC sued the Russian government in New York – and pulled in a number of members of the Trump campaign, including Donald Trump himself, campaign managers Paul Manafort and Roger Stone, Trump's son-in-law Jared Kushner, as well as Wikileaks, and its founder Julian Assange.

It alleges a conspiracy between the Trump campaign, Wikileaks and the Russian government – something that continues to be investigated by special prosecutor Robert Mueller. Mueller is expected to hand down more indictments in the coming weeks. ®