Another 3D printer? Oh, stop it, you're killing us. Perhaps literally: Fears over ultrafine dust 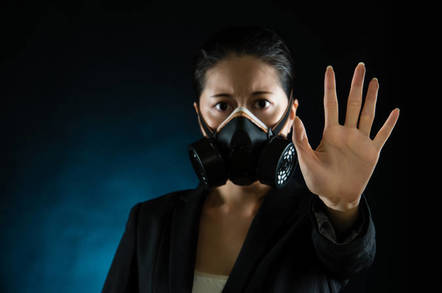 Analysis Scientists are calling for more research into the effect, negative or otherwise, of 3D printers on indoor air quality.

A variety of semi-pro 3D printers – fused deposition modelling (FDM) aka fused filament fabrication (FFF) – create models by heating and depositing layer upon layers of plastic filament, gradually forming the final shape. The process emits both particles and volatile organic compounds (VOCs), some of which are known to be toxic.

As the researchers – Qian Zhang, Jenny P. S. Wong, Aika Y. Davis, Marilyn S. Black, and Rodney J. Weber at the Underwriters Laboratories' (UL) Chemical Safety group and the Georgia Institute of Technology in the US – explained in a paper last year, "It follows that FDM 3D printers are potentially hazardous to operate in certain indoor environments."

That's the theory, but the academics are not stating there's a proven health risk. Rather, they want to establish whether 3D printer emissions with known toxins have measurable human health effects in work environments. And they're calling for precautions to minimize exposure.

"Studies have shown that fused filament fabrication (FFF) 3D printers designed for general public use emit high levels of ultrafine and fine particles," said Rodney Weber, Georgia Tech's primary investigator of the research, in a statement this week. "Preliminary tests with in vivo, in vitro and acellular methods for particles generated by a limited number of filaments showed adverse responses."

Weber and his co-investigators have been studying the 3D printer emissions and published academic papers on the subject last year and earlier this year. They've been involved in helping to develop a UL/American National Standards Institute (ANSI) standard by which 3D printers can be tested. The standard, UL/ANSI 2904, is expected to be published next month.

In a phone interview with The Register, Marilyn Black, VP and senior technical advisor of UL, explained, "Our research was geared toward evaluating the chemical and particle emissions which come off operating 3D printers. There had been some concern about that in the past but no one had studied it in any controlled fashion."

The situation recalls how laser printers were viewed a decade ago following the publication of a study that raised questions about the impact of ultrafine laser toner particles in enclosed environments. The study was widely cited in the media as proof that laser printer emissions harmed human health, but medical authorities at the time stressed that no health effects had been established. Rather, the researchers responsible said their findings merely underscored the need for additional study.

Black and her peers have been looking at the emissions of smaller models of 3D printers, the sort employed in offices, schools, and homes. "What we found was there are a significant number of ultrafine particles coming off of these devices and they're in the nano-particle range," she said. "From a health standpoint, that's very concerning because when these particles are inhaled, they can go deep into the pulmonary system."

Other organizations share that concern. In August, NIOSH, the National Institute for Occupational Safety and Health, part of the US federal government's Centers for Disease Control and Prevention (CDC), published findings related to emissions from MakerBot 3D printers. Noting that particulate and VOC concentrations from a MakerBot printer running in a conference room setting were lower than expected, NIOSH said that there are no established occupational exposure limits for 3D printer emissions and called for further study.

Black said, "We don't have any particular health standard yet for an acceptable level of ultrafine particles. You need to try to minimize your exposure because we know they do get into the biological system."

Black said the Weizmann Institute of Science, a public research university in Rehovot, Israel, has done some preliminary work on the VOCs coming off 3D printers and the results show some toxicity. She also pointed to NIOSH research that has suggested there may be a cardiovascular response to inhaled 3D printer emissions. Her advice is to minimize exposure by ensuring there's adequate ventilation and by not standing beside 3D printers while they're operating. ®

HP Inc: No DRM in our 3D printers, we swear (unlike our 2D ones)

Raw materials will be open and multi-source

3D printers set for lift off? Yes, yes, yes... at some point in the future

If only hardware makers could print more customers

And with possible job cuts looming in 2017, how about money – can they print money?

India: Yeah, we would like to 3D-print igloos on the Moon

Are we really doing this? ask politicos

Something weird to deck the Xmas tree with: 3D-printed Wi-Fi baubles