FYI NASA just lobbed its Parker probe around the Sun in closest flyby yet: A nerve-racking 15M miles from the surface 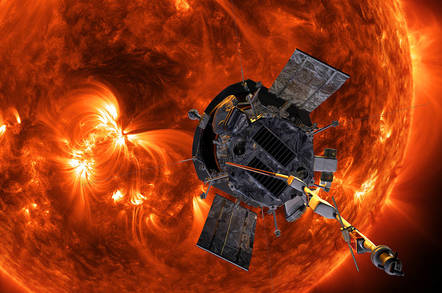 NASA’s Parker Solar Probe has kept its cool, successfully surviving sweltering temperatures to reach its first close encounter with the Sun, coming within 15 million miles of the solar surface.

Launched in August, the spacecraft is on a mission to study the star at the center of our Solar System. The goal is to help scientists crack the coronal heating problem - why is the corona, a ring made from extending threads of plasma visible during total solar eclipses, hotter than the star’s surface?

NASA also wants to work out the mechanism that accelerates the solar wind, a stream of charged particles, and study how the star impacts space weather.

Although its first swoop towards the Sun has gone smoothly this week, the probe is expected to get increasingly close, eventually reaching to within 3.9 million miles of the orb over the course of its 23 approaches. These flybys are planned over seven years and requires the bot to fling itself at Venus repeatedly for gravity assists.

“Parker Solar Probe was designed to take care of itself and its precious payload during this close approach, with no control from us on Earth — and now we know it succeeded,” said Thomas Zurbuchen, an associate administrator working at NASA’s Science Mission Directorate.

At its first perihelion, the probe has set two new records. It has got closer to the Sun and has traveled faster than any other spacecraft so far - reaching a distance of 15 million miles from the star at a whopping speed of 213,200 miles per hour.

Need electric propulsion for your satellite? Want a 'made in Britain' sticker? Step right this way...

The spacecraft is equipped with a special heatshield to withstand the Sun’s blaring energy. It may be travelling through an environment that reaches several million degrees, but it only needs to withstand heat of up to 3000 degrees Fahrenheit (1649 degrees Celsius).

The high temperatures are generated from all the highly energetic particles the Sun emits, but there aren’t that many of these particles floating around so it doesn’t transfer as much heat to the probe.

The shield has a diameter of 2.3 meters and is 11.4 centimeters thick. Layers of foam made from a carbon composite material are wedged in between two carbon plates. The inner plate, facing the Sun, is coated with a white ceramic paint to reflect heat to help keep the instruments onboard at a cool 81 degrees Fahrenheit (27 degrees Celsius).

Its first encounter will last until 11 November and scientists will receive their first wad of data several weeks after.

“As we send spacecraft and astronauts further and further from home, we must understand this space environment just as early seafarers needed to understand the ocean,” NASA said. ®