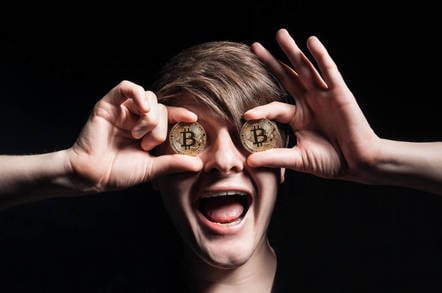 Cryptocurrencies require as much, if not more, energy to mine as precious metals like copper, gold or platinum, according to some latest calculations.

The figures were jotted down by Max Krause, a researcher at the Oak Ridge Institute for Science and Education, and Thabet Toloymat, an environmental engineer working in Cincinnati, Ohio, in the US.

The pair attempted to estimated the average amount of energy consumed to generate one dollar's worth of stuff, and the bottom line is: crafting Bitcoin, Ethereum, Litecoin, and Monero consumes at least the same amount of energy as mining copper, gold, platinum and rare earth oxides, apparently.

“From 1 January 2016 to 30 June 2018, we estimate that mining Bitcoin, Ethereum, Litecoin and Monero consumed an average of 17, 7, 7 and 14 MJ (MegaJoules) to generate $1, respectively,” according to the duo's paper, published in Nature this week.

Gold rush is over

Crypto-coin mining consumes energy because it involves rigs of software and hardware competing against each other to add blocks to a currency's blockchain, which is a digital ledger that publicly lists all the transactions for that particular funbux.

These blocks store the details of transactions, which is why they are heavily sought after. Miners are rewarded with digital currency every time they calculate a valid block for the blockchain to use.

All the metadata for the proposed block is contained in its block header, which is fed into a hash function that reduces the metadata into a short signature. This signature is the candidate block's hash.

Miners have to construct candidate blocks from the pool of transactions that each have a block hash less than or equal to a target value set by the currency network. If the candidate block meets these requirements, it is accepted by the network and added the blockchain as a confirmed block, and thus confirms the transaction it contains. It also references the previous block, and the next block will reference it, forming the digital ledger.

Voila! All of this block hashing business consumes a lot of energy as it is, basically, a guessing game. Miners race to produce as many as possible per second to raise the likelihood they can create an accepted block. The aim is to make more money from crafting blocks than it costs, in energy and hardware, to mine them.

Custom chips are typically used to churn out potential block hashes at an alarming rate, drawing a ton of energy in the process. Graphics-card processors used to be popular for this task, but their use died away this summer: custom chips are preferred for Bitcoin, while the price of GPU-mined currencies, such as Etherum, dropped, making it no longer economically viable to blow kilowatts of power on crafting the currency using graphics chipsets.

The dollar value of cryptocurrencies like Bitcoin, Ethereum, Litecoin and Monero fluctuates, although the rate that hashes are calculated has increased over time. The par of researchers reckon that as, of August 2018, a whopping 50 quintillion (50 x 1018) hashes performed for the Bitcoin network, every second, every day.

Alas, all this mining and wasted computation is expensive, in terms of energy and rig costs, and no good for the planet. It is estimated by the paper's authors that mining all four cryptocurrencies during the January 2016 to June 2018 has pumped out between three to 15 million tonnes of carbon dioxide emissions into the atmosphere.

Bitcoin, the most widely traded cryptocurrency, and Litecoin, a very similar currency to Bitcoin, in particular are becoming significantly difficult to mine, in that it is harder to generate a valid block, requiring more energy over time.

At the moment, the Bitcoin network consumes as much energy per year as the whole of Ireland or Hong Kong, according to the paper. Monero’s energy demand has decreased, and Ethereum may get lower in the future.

Cryptocurrencies are similar to precious metals and minerals in some way. It gets increasingly difficult and expensive to mine, and eventually the costs outweigh the reward. At this rate, it is estimated that 81 per cent of Bitcoins have been mined, and the last coins will be mined in approximately 2140. ®