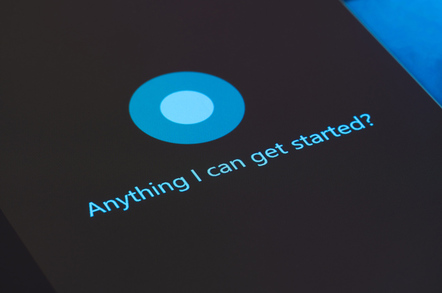 The move comes less than two months after Soltero took to the stage at Ignite to push the tech at businesses.

Having singularly failed to capture the hearts and minds of consumers, the new strategy involved persuading enterprises that Cortana's personal assistant chops could be put to work filing reports and other "company-specific" tasks.

Alas, it does not appear that Cortana's current daddy is going to be hanging around long enough to see those efforts come to fruition, according to a tweet last night.

I've made the decision to leave Microsoft. The past 4 years have been an incredible experience. I'm humbled to have been a part of building something that 100M+ users depend on every day and grateful to have worked with some amazing people.

Soltero had previously been chief technology officer for SaaS and Application Services at VMware before co-founding Acompli and developing an email app that Microsoft gobbled in December 2014.

Unsurprisingly, Soltero was put to work dealing with Outlook Mobile, eventually becoming corporate VP of the whole Outlook team. He then moved on to the Office Product Group before being handed the chalice of Cortana in March 2018.

Soltero arrived as the Nadella era at Microsoft was kicking off in earnest - the new CEO had started to parachute the bosses of acquired companies into senior roles as a means to shake things up a bit at Redmond.

With the Cortana veep expected to leave before the end of the year, there is no word from Microsoft on who will take on the personal assistant. As for the future of the technology itself, having been shunned by consumers as a standalone platform, deeper integration into Redmond's productivity toolset awaits. ®