De-crewed? More like de-orbit if the ISS had to wait for Orion 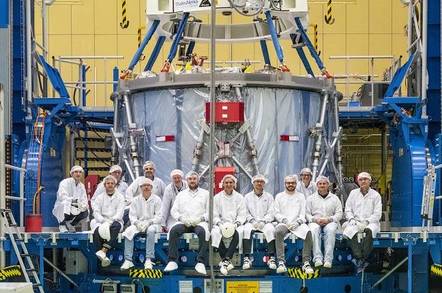 It was another busy week in space as Russia notched up a second Soyuz success, China conducted its 32nd launch of the year and NASA awaited the arrival of its first service module for Orion.

Russia: Two Soyuz launches down, one to go

The Russian space agency, Roscosmos, sent a GLONASS-M navigation satellite into orbit atop the workhorse Soyuz booster as it continued its return to flight following October's mishap. The launch, conducted on 3 November at 20:17 UTC, is the second since an ISS-bound crew found themselves enjoying an earlier-than-expected rendezvous with Earth after things went awry during staging.

Roscosmos reckoned it isolated the problem to assembly rather than design, and has set the goal of three launches to prove the safety of the booster.

The Soyuz-2-1b, launched from Plesetsk Cosmodrome, is not quite the same beast as that ridden by cosmonauts and astronauts from Baikonur, but is close enough as far as Roscosmos is concerned.

Following the successful lift-off, a Fregat-M upper stage sent the Uragan-M GLONASS satellite on to its medium-earth-orbit. The launch was the 48th of the Uragan-M series of navigation satellites, and the 1,415kg spacecraft is expected to last at least seven years before requiring replacement.

NASA has taken more baby steps towards getting astronauts into its homegrown Orion capsule sometime in the next decade with the shipment from Germany of the ESA's contribution to the project – the European Service Module (ESM).

Much like the Apollo service module, the ESM is mounted beneath the Orion capsule and provides propulsion, power and oxygen for astronauts embarking on a mission beyond low-Earth orbit.

Not that this particular ESM will serve astronauts. NASA plans to launch it in 2020 on top of its Space Launch System (SLS) and send the Orion-ESM combo beyond the Moon to check it out before sticking humans in it. That milestone is currently pencilled in for 2022, although as with all things SLS-based will likely continue marching to the right.

With NASA struggling to complete its Orion capsule, let alone a service module, ESA rode to the rescue with a design based on the expendable Automated Transfer Vehicle (ATV), which successfully ferried cargo to the ISS five times between 2008 and 2014. In keeping with NASA's current mission of taking equipment painstakingly carried to orbit and back by the Space Shuttle and, er, throwing it away, an Orbital Maneuvering System (OMS) engine left over from the defunct programme will be used as the primary source of propulsion.

As if to show that nothing is ever truly new, the OMS has its roots in the Apollo programme and is derived from the old Apollo Service Module's Service Propulsion System engine, thus bringing a pleasing symmetry to things.

Not to be outdone by Russia's satellite navigation shenanigans, China conducted its 32nd launch of the year by sending up another Beidou navigation satellite on 1 November at 1557 UTC. The geostationary satellite is part of the third phase of China's navigation effort and was launched atop a Long March 3B rocket from the Xichang Space Center.

The Long March 3B has been a relatively reliable booster over the years, notching up only one total failure on its maiden flight in 1996. Two subsequent partial failures were traced to issues with the final stage of the three-stage rocket.

While China maintains its prodigious launch rate, newcomers Rocket Lab have taken a deep breath and set a date for the third launch of its Electron rocket, "It's Business Time". The company has a generous launch window, which runs from 11 to 19 November, with daily opportunities to light the blue touchpaper between 16:00 and 20:00 New Zealand local time.

This follows the first successful Electron launch in January 2018, "Still Testing", which flung three satellites into orbit. The previous attempt, "It's a Test", had to be destroyed when the rocket stopped talking to the range safety officer.

The 17m rocket is capable of sending 150kg to a 500km orbit, and Rocket Lab plans to send six satellites and a technology demonstrator on the launcher. Should the mission go well, the company has the NASA ELaNa mission to look forward to in December. By 2020, Rocket Lab intends to be able to build, test and launch an Electron every week. ®