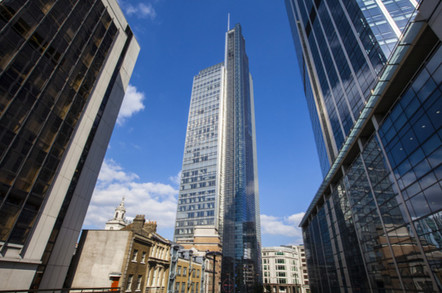 Heron Tower (110 Bishopsgate) in the City of London - a monument to money with a big fuckoff fish tank. Pic: Chris Dorney/Shutterstock

Salesforce's European limb last year coughed £5m in tax to the UK government - the business is registered in Blighty - as it made a 1.73 pre-tax profit percentage on a turnover of £1.51bn.

The cloudy biz increased sales in the region by 50 per cent in the year ended 31 January 2018, according to the full accounts for Salesforce.com EMEA Ltd, which have just been published on Companies House (PDF).

SaaS subscription services made up the bulk of this, adding some £1.2bn to Salesforce EMEA's coffers. This was up 48 per cent on the previous year, where SaaS subscription brought in £813m.

However, Salesforce operating expenses rose at about the same rate – from £1.00bn to £1.49bn.

If that seems small, consider Amazon managed to wangle a tax bill of £1.7m this year, when it reported a turnover of £2bn and pre-tax profit of £72.4m.

The Companies House filing also shows that Saleforce EMEA – whose registered office is the fish-tank-toting* Salesforce Tower in London – employed on average 1,252 staff each month over the year. That's up from 1,011 in 2017, with 160 more sales people and 81 more administrative staff added to the ranks.

Despite this, wages and salaries were down slightly on the previous year, falling from £87m to £82.7m.

Any cuts that might have happened don't appear to have affected the highest-paid director in the firm, whose remuneration rose from £762,171 to £826,714.

* The building – formerly known as the Heron Tower – has the UK's largest privately owned aquarium in the lobby, at 4 metres high, 12 metres long and 2 metres wide, and aims to recreate the ecosystem present on Heron Island in the Great Barrier Reef.