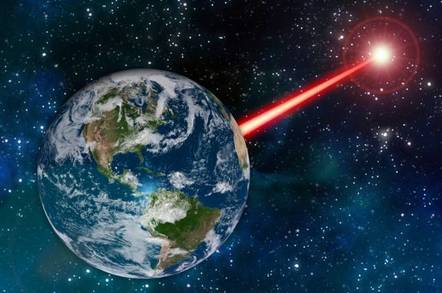 Space agencies and private citizens spend millions of dollars and countless hours hunting for signs of extraterrestrial life. Yet, there may be an easier way to find intelligent civilizations, according to a pair of researchers from MIT in the US.

Instead of sending spacecraft out into space or listening for a signal on massive radio arrays, the aliens should come to us. And what could possibly be the best way to help them find Earth? Shine a giant laser, er, of course.

The beam would have to be a whopping one to two megawatts in power – that’s like focusing more than 33,333 household light bulbs together into a single beam (given that an average bulb is about 60 watts).

The light would also have to be shone through a massive 30 to 45 metre telescope to magnify it and direct it out to space. In addition, the infrared beam must be powerful enough to not be drowned out by the Sun’s signal.

“This would be a challenging project but not an impossible one,” said James Clark, a graduate student at MIT’s department of aeronautics and astronautics, over the weekend.

There is, to the best of our knowledge, no laser that comes close to the researchers’ specifications. The US Air Force did toy with the Boeing YAL-1 Airborne Laser, a megawatt 1.315-micrometre infrared laser, to shoot down ballistic missiles.

The project was scrapped, however, in 2011, and was last operated in 2012. Other researchers have claimed to have crafted even more powerful lasers since, though these can focus pulses for only a few fractions of a second.

Now Clark and his advisor, Kerri Cahoy, an associate professor of aeronautics and astronautics, have laid out possible plans of building such a laser in a paper, which was published on Monday in The Astrophysical Journal.

“The kinds of lasers and telescopes that are being built today can produce a detectable signal, so that an astronomer could take one look at our star and immediately see something unusual about its spectrum. I don’t know if intelligent creatures around the sun would be their first guess, but it would certainly attract further attention,” said Clark.

The pair estimate that a beam could stretch to distances no more than 20,000 light years, and would be broad enough to bathe entire habitable zones in distant planetary systems. It would mean, that extraterrestrials over at Trappist-1, for example, would be constantly bombarded by the light.

In theory, it would mean that advanced lifeforms could fashion that same light into pulses and redirect it back to Earth to send a message. The first contact, dubbed, a handshake could be confirmed over several years, Clark added.

“If we were to successfully close a handshake and start to communicate, we could flash a message, at a data rate of about a few hundred bits per second, which would get there in just a few years,” says Clark, a graduate student in MIT’s Department of Aeronautics and Astronautics and author of the study.

The laser should also be built on top of a mountain so that the light won’t be dimmed by having to pass through the atmosphere as much. It would produce a flux density of about 800 watts of power per square meter, less than the Sun, which generates 1,300 watts per square meter. Although invisible, people should avoid staring directly at the beam as it would be powerful enough to scramble the cameras of any spacecraft passing through it.

The whole thing is entirely theoretical and should be taken with a pinch of salt, Clark said. “In general, this was a feasibility study. Whether or not this is a good idea, that’s a discussion for future work.”

Certainly some scientist had strong views on the topic. The late, great Stephen Hawking was vocal on the topic, warning that any meeting with aliens was likely to end badly for humanity.

We imagine lighting up whole planets with a giant laser pointer will perhaps not go down too well with any far-away ETs. What do we think they are, space cats or something? And what if they fire back? ®