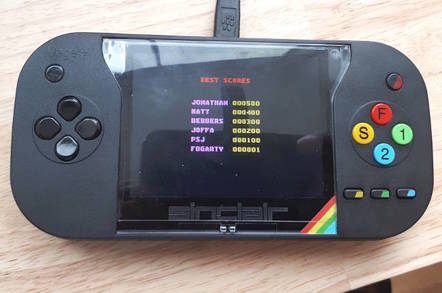 David Levy, one of the players in the Sinclair ZX Spectrum Vega+ scandal in the UK, has reappeared in the news – in connection with a gaming and design tech conference that invited notorious alt-right firebrand Steve Bannon to be its keynote speaker.

For those lucky few who have managed to avoid hearing about the boiling cesspit that is American politics right now, Bannon was briefly a top adviser to US President Donald Trump, as well as having been exec chairman of the far-right American website Breitbart "News." He is something of a hate figure to those not on the hard-right wing of politics. Many on the right also keep their distance from this chap, who once said he was fascinated by Mussolini.

Wired magazine published a querulous article asking why Bannon had been invited to speak at the conference, noting that organiser Adrian Cheok had merged ACE2018 with another conference he runs: the International Congress on Love and Sex with Robots.

Curiously, that is also the title of a book written by Levy, who sits on ACE’s organising committee. That fact has not gone unnoticed by the crowd who funded Levy’s last commercial venture, the ZX Spectrum Vega+ handheld gaming console. They flooded ACE’s Facebook page with outrage at his appointment to the ACE committee in August.

ZX Spectrum saga not over yet

As regular readers know all too well, Levy’s company, Retro Computers Ltd, took £513,000 in crowdfunded cash from 4,500 members of the public a few years ago to build modern, handheld versions of the old Sinclair ZX Spectrum. Levy is RCL's chairman.

A small number of devices in what appeared to be prototype format were eventually delivered, with the company ignoring the majority of those demanding their money back. One sued RCL; and won; others are waiting patiently for their £105 per device to be refunded to them.

Indiegogo, the crowdfunding platform which enabled all this, has seemingly turned its back on the whole scandal after some vague words about retaining debt collectors. It has issued no updates about progress on recovering the monies, and its last involvement with the project was to contradict (on 5 July 2018) claims by RCL that Indiegogo itself had been hacked.

We have asked Levy to comment on both his involvement with ACE and Steve Bannon, as well as the status of RCL and the Vega+. He has, however, been uncommunicative since the summer. ®