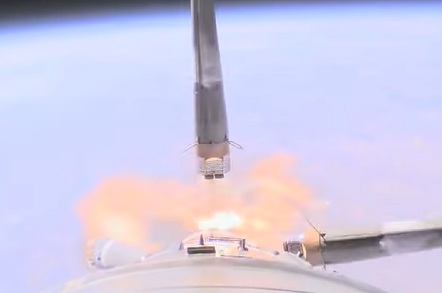 One of these boosters is not like the others

The Russian space agency, Roscosmos, has completed its investigation into October’s Soyuz mishap in record time, pointing the finger of blame at problems during assembly.

Mutterings emitted from the space agency earlier this week suggested that the issue was related to a sensor that detects stage separation of the booster. In yesterday’s press conference, Roscosmos provided a few more details and shared a terrifying video showing the moment things went bad for the Soyuz. It then gave the green light for putting a crew back on the thing next month.

The actual explosion was, according to the State Commission tasked with getting to the bottom of the mess, caused by one of the side boosters not separating correctly and striking the rocket core. This led to the depressurisation of a fuel tank and the loss of control of the booster. The problems start at 1:23 in the video.

Of course, the real question is why did the separation fail? The answer, according to Roscosmos, was a failure to open a nozzle at the top of the strap-on booster to vent its tank. This meant the booster did not separate cleanly.

The nozzle failure was caused by a faulty contact sensor, which had been “bent” during assembly of the Soyuz at the Baikonur cosmodrome.

The Russian space agency went on to declare the issue as “operational in nature”, meaning that the rocket is fine. It's just those pesky humans that put the thing together causing issues.

The statement was a little light on what Roscosmos intends to do, simply saying that it had “organized the development of a set of measures to exclude the possibility of an emergency situation repeating”. So that’s all right then.

Russia said it intends to launch the next crew to the International Space Station (ISS) on 3 December. NASA, however, has insisted that that date depends on the outcome of its own flight readiness review.

Assuming the Americans give the thumbs-up, Soyuz MS-11, carrying veteran Russian cosmonaut Oleg Kononenko and rookie US and Canadian astros Anne McClain and David Saint-Jacques, will arrive in plenty of time to avoid a potential decrewing of the ISS. ®