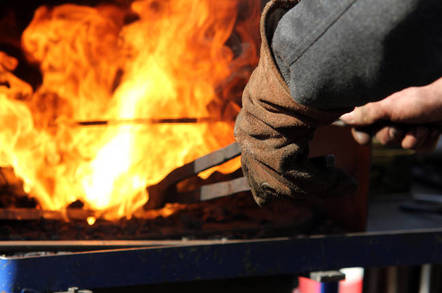 Seagate has set a course to deliver a 48TB disk drive in 2023 using its HAMR (heat-assisted magnetic recording) technology, doubling areal density every 30 months, meaning 100TB could be possible by 2025/26.

A different and more stable recording medium is used, which needs heating before bit values can be written, meaning the read-write head requires a laser-heating element. HAMR bits can be made smaller than PMR bits, so a disk drive platter's areal density increases and drive capacity rises beyond the 16TB limit or so of 3.5-inch format disk drives.

Seagate will introduce its first HAMR drives in 2020. 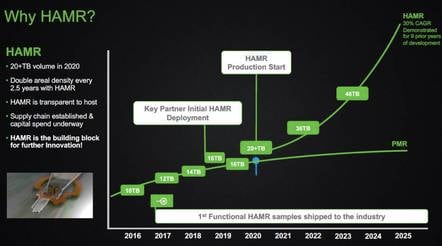 The chart above, from an A3 Tech Live event in London, shows Seagate started developing its HAMR tech in 2016 and that a 20TB+ drive will be rolled out in 2020.

Capacity goes on increasing beyond 2025, with 100TB looking likely.

The firm makes the point that HAMR drives will be drop-in replacements for current PMR drives.

SMR drives have blocks of partially overlapping write tracks exposing narrower read tracks, making read speed faster than re-write speed as the overlapping track block has to be rewritten in its entirety rather than, as at present, just the affected bytes in a write track.

The two HAMR drive product lines have approximately the same capacities, but the performance drives appear to reach a particular capacity point a little after the capacity drives. This could be an artefact of the graphic and, anyway, Seagate is not predicting product announcements here, only capacity trends.

The first multi-actuator drive should appear in 2019, according to the chart. That could potentially speed up SMT drives as well as non-shingled disks.

When HAMR tech loses its ability to advance areal density further, Seagate envisages using HDMR (heated dot magnetic recording), a refinement of HAMR that uses BPMR (bit-patterned media recording) in which smaller bits (made up of individual magnetic grains) sit on raised dots or islands a few nanometres above a baseline. That would effectively increase the separation between neighbouring bits.

We have 13 to 25 months to wait for the first HAMR drives. Seagate said it has made millions of HAMR drive heads and the technology is reliable. Bring it on, we want to see the HAMR drop and deliver both fatter and faster drives. ®