Phew, someone didn't get the plug-all-useful-holes memo 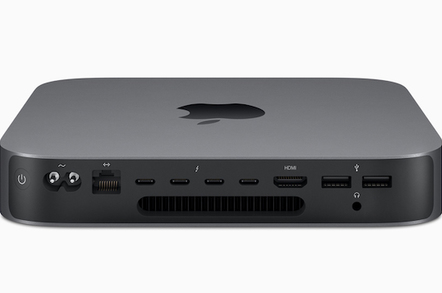 Analysis The world's fourth biggest PC company sells three desktop PC lines, but it hadn't updated one of those three for four years. Maybe Apple had forgotten that the humble and unassuming Mac mini was there at all. But it fixed that this week.

The Mac mini has been revived as a machine for grown-ups, professionals such as programmers. It flaunts its legacy ports in other Apple products' faces. While it's much more expensive than before (at £799 and £1,099+), it's much more capable too.

There's a token i3 model but Apple really wants you to buy the Core i7, a chip which Joe Consumer certainly doesn't need. The mini can take up to 64GB of RAM or 2TB of storage. But it gets better.

Astonishingly, I/O subsystems that other Apple product teams exterminated years ago – like the 3.5mm headphone port, USB 3.0, full-sized Ethernet – live on in this happy place. The presence of four, yes, four Thunderbolt 3+ ports allows the user to piggyback on a eGPU.

So although a decent Mac mini is now priced comfortably above £1,000, it's going to be free of the grumbles that plagued recent Apple laptop updates (I specified a build-to-order mini that came to £3,859 at checkout). Perhaps that earns the Mac mini team at Apple another four-year break, sipping cocktails on some far away beach, before they have to think about updating it again.

This is always where the Mac mini should have been.

Apple has never done budget desktops well. So why insist that it should?

There's an enduring misconception about the Mac mini – that it was a budget machine designed to broaden the Mac user base. I had a front-row seat in 2005 when the Mac mini was launched and can I tell you, it never really was about that.

The mini was never a pile-'em-high, sell-'em-cheap machine. Funnily enough in both 2004 and 2018, that's what the rumour mill suggested it would be. The mill was wrong then and wrong again today. Partly this was a reaction to the G4 Cube misjudgement. Apple had made a headless Mac that was too expensive. So naturally, the gurus predicted, it would make one really cheap.

If you go back even further, you find the press willing Apple on to meet a particularly arbitrary low price point, then being aghast at how poor the resulting product is. I give you the 1990 Mac Classic, a 8Mhz 68000 clunker with the same case and chip as the original Mac from 1984. That came out alongside a low-cost colour (LC) model that was equally awful, just in its own unique way. Both regularly feature in "worst Mac ever" lists.

Apple didn't make this mistake with the utilitarian mini. By the time one added a display, keyboard and mouse to a decently specced base unit, it was as expensive as a mid-to-high-end PC of the time, around $1,300.

"Apple really isn't doing this for charity, and Michael Dell won't be losing any sleep," we noted. 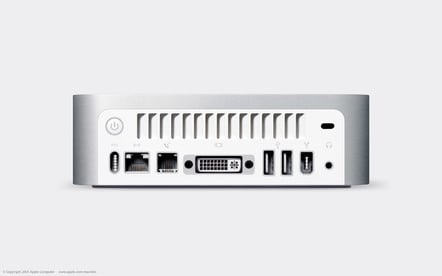 The mini has had a strange life largely because of Apple's on-off relationship with business buyers. Steve Jobs had wanted everyone to use the Macintosh, including enterprises. It included built-in networking via one of the two serial ports. But then Apple priced it out of reach of most people. Business at the time wanted something you could prise open, which had a market of expansion cards.

Chuck this on expenses: £2k iPad paints Apple as the premium fondleslab specialist – as planned

After he left Apple, Jobs had railed at the company he founded being run by "Hewlett-Packard people". But while Apple put on a corporate suit in the 1980s and 1990s in his absence, Windows won.

Fast-forward to the early 2000s. Jobs was back, and Apple's Unix-based OS X was finally ready for prime time, while post-XP Microsoft was reeling under QA and security issues. Surely now was time to address enterprise users? Apple's desktop platform was demonstrably superior, and safer, than Windows.

The top management agreed and decided it could expand its business base beyond education and media into more sectors, and hired some very good people. Mac OS X sprouted a server edition.

Well, Apple couldn't quite decide if it was really about business. The mini spent a few years as a departmental server. Finally the focus is on the pro user. Today Apple has become a $25bn+ a year (Cook's 2015 estimate) company by accident. ®

PS: Once a separate SKU, Mac OS X Server is a £19.99 albeit deprecated download from the App Store.