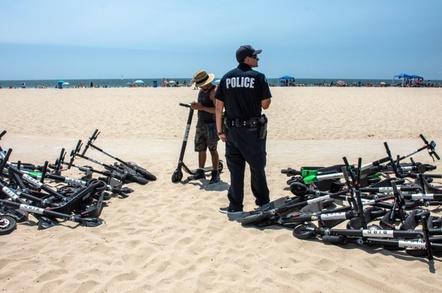 Scooter providers Bird and Lime, and scooter makers Segway and Xiaomi, face a lawsuit in Los Angeles, Calif., claiming that the two-wheeled tech toys are poorly manufactured and maintained.

The complaint, which aspires to be certified as a class action, was filed earlier this month in a Los Angeles Superior Court by McGee, Lerer & Associates, on behalf of nine plaintiffs who claim to have been injured while riding the electric scooters or after tripping over scooters left lying on the sidewalk.

"While acting under the guise of the commendable goals of furthering personal freedom and mobility and protecting the environment, the Defendants, and each of them, are endangering the health, safety and welfare of riders, pedestrians and the general public," the complaint claims.

Despite their evident popularity, electric scooters and the transportation startups behind them have faced a backlash for setting up shop without the blessing of municipal authorities. Apart from vandalization by those who resent the devices for various reasons, cities have struggled to bring scooter operators under local rules. San Francisco briefly banned electric scooters until a permit program could be put in place.

Bird and Lime failed to make the cut in San Francisco; the San Francisco Municipal Transport Agency instead awarded permits to two other scooter providers, Scoot and Skip, citing their commitments to safety. Denver has been wrestling with similar issues.

Attorney Catherine Lerer in a phone interview with The Register, said electric scooters are extremely dangerous. "Both riders and pedestrians are suffering serious injuries at an alarming rate," she said, noting that she's received somewhere between 100 and 200 calls from victims and that other attorneys in Los Angeles have similar tales.

"I don't think they're well-maintained," she said. "These are consumer-grade products used for commercial purposes. They were never intended for the heavy fleet usage they're getting."

Lerer said both Bird and Lime appear to be trying to address that by rolling out more rugged models intended for constant use. But she says the companies have not withdrawn their older models.

The companies also fail to maintain their scooters, said Lerer. "The instructions clearly state to inspect them before every use," she said. "Are they being inspected every time? No."

Lerer said one of her clients is a former Bird mechanic who told her that the company does not affirmatively inspect its scooters. It does so, she said, only when customers report a problem.

"They're depending on the riders to notify them," she said. "It's a really bad system to depend on your customers to be your eyes and ears if there's a problem with the scooters."

Lerer said the injuries arising from the use of these scooters are often serious, consisting of broken bones or worse. Among those who have been injured, she said, the complaints she hears repeatedly involve failing brakes, stuck throttles, and scooters dying mid-ride.

Though these companies have taken steps to enhance safety, their interventions don't always work out. The law firm's blog claims that geo-speed limiting, recently implemented by both Bird and Lime to prevent scooters from exceeding certain speeds in specific areas, can cause accidents by forcing unexpected speed changes.

Claims that electric scooters represent a safety hazard have been reported elsewhere. The Baltimore Sun on Tuesday said that doctors in the Baltimore area have reported a surge in scooter-related injuries.

Lime did not respond to a request for comment.

Bird, in a statement emailed to The Register, wanted to talk about cars and the environment.

"Class action attorneys with a real interest in improving transportation safety should be focused on reducing the 40,000 deaths caused by cars every year in the US," a company spokesperson said. "At Bird, safety is our very top priority, and it drives our mission to get cars off the road to make cities safer and more livable. The climate crisis and our car addiction demand a transportation mode shift to cleaner, affordable vehicles. Shared e-scooters are already replacing millions of short car trips and the pollution that comes with them, and we at Bird will continue to work with cities to help them redesign their transportation networks so that they are safer and cleaner."

The Register asked both Bird and Lime to provide data on customer injuries. Neither company responded to that request. ®

Xiaomi the way to the sale rack, would you?