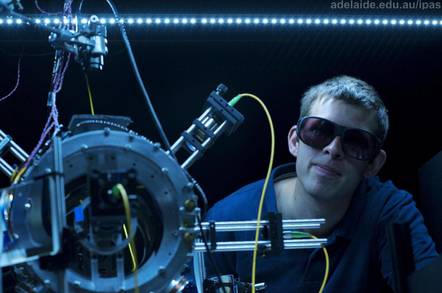 The idea of tractor beams, concentrated rays of energy used to trap and move objects at a distance, was first introduced in science fiction.

A group of physicists from the University of Adelaide, Australia, and the Université de Limoges, France, however are trying to make them a reality. But don’t get too excited, current advances can’t use tractor beams for berthing spaceships, like in Star Wars when the Death Star pulls in the Millenium Falcon. They can’t even hold small objects like the gravity tethers in Dead Space, a popular horror video game, either.

Instead the researchers had to start small, using beams of light to manipulate atoms. “Although tractor beams are green or blue in the movies, in this case the trap is made of invisible infra-red light. The beam grabs hold of atoms that are floating in a chamber that is almost completely emptied of gas - a little sample of outer space on Earth,” said Ashby Hilton, a PhD student at the University of Adelaide.

“Every atom that enters the tractor beam is pulled into the fibre - there is no escape. And once sucked into the interior of the optical fibre the atoms can be held for long periods of time. Our experiments show that we can very precisely control light to produce exactly the right conditions to control atoms."

The results have been published in the Physical Review Applied journal. The researchers call it their device a “waveguide trap”, and it’s capable of holding millions of cold rubidium atoms.

Waveguide traps are pretty complicated to set up. A series of lasers, lenses, mirrors, light gratings and filters all have to be arranged in perfect order to produce a powerful beam of infrared light. The rubidium atoms are held in place as they interact with the infrared photons and are pushed into the centre of the light beam.

The team hope to refine their experiments by using a hollow cone of light to move atoms, rather than a solid laser beam. This will hold the atoms more steadily, as the centre of the light cone will be dark and won’t interfere with the atoms themselves.

“Our researchers are manipulating and measuring individual atoms and molecules to sense the world around us. This new era of quantum sensing is opening up diverse new possibilities from attempting to detect disease through finding particular molecules in the breath, to assisting miners and defence by detecting anomalous magnetic fields associated with mineral deposits or covert submarine activity," Andre Luiten, co-author of the paper and chair of experimental physics at the University of Adelaide, concluded. ®