North Carolina, but it could happen aaannnyyywherrre 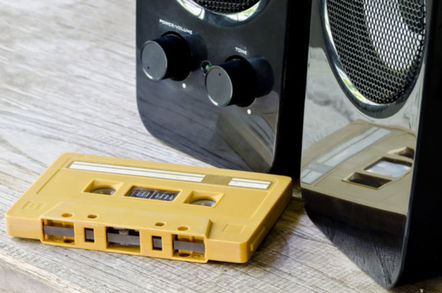 An entire block was shut down around the Duke Energy building in uptown Charlotte, North Carolina, on Tuesday after mail room staff reported "a small manila envelope handwritten and addressed from out of state" to police.

The workers were right to be concerned. Further investigation by a bomb squad revealed the package to contain an audio cassette tape by crap-haired '80s chart-botherers Journey.

"An employee found a small package that appeared suspicious," police told The Charlotte Observer. "As a precaution, pedestrian and vehicular traffic were restricted."

Canine and bomb units were dispatched to the scene, though El Reg would have suggested a contingent of the Home Guard and a care package of industrial-grade ear protectors dropped over Charlotte, lest anyone foolishly unleashed the tape's contents, as a more proportional response.

Do we know which album? Because Trial by Fire should come with a warning.

Journey fundamentalists demanded to know what foul sorcery had been directed against Duke Energy – full album or mixtape? – but mercifully no one had to find out. One "fan" theorised that it could have been a copy of 1996's Trial by Fire, which, they quipped, should "come with a warning".

The Register must take this opportunity to emphasise that Journey's entire discography should "come with a warning".

Those unfamiliar with Journey's crimes against music should probably stop reading here. Ignorance is bliss, they say. The band formed in San Francisco, 1973, and enjoyed strong commercial success into the mid-'80s with their brand of skin-crawlingly nasal arena rock. They're best known for the tracks "Open Arms", "Any Way You Want It" and "Don't Stop Believin'".

*** DISCLAIMER: THE REGISTER AND SITUATION PUBLISHING TAKE NO RESPONSIBILITY FOR HARM CAUSED AS A RESULT OF JAMMING HARD TO THE VIDEO BELOW ***

Sorry, what was that? Oh, right, the "story". Police have appealed for "additional information concerning this incident". It's unclear what has happened to the cassette, but hopefully it was safely detonated.

The Register's resident storage guru, Chris Mellor, has long railed against the "tape is dead" argument. Unfortunately for the citizens of Charlotte, he was right. ®