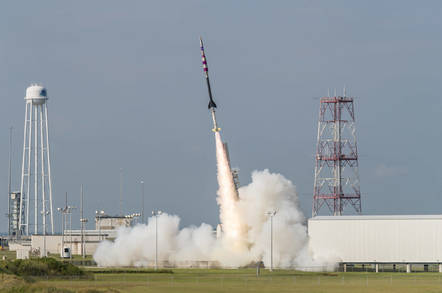 Video NASA engineers have launched a gigantic parachute as big as a house at record speed to prepare for its Mars 2020 mission.

The object, dubbed ASPIRE (Advanced Supersonic Parachute Inflation Research Experiments), unfolded from a small cylinder to a massive parachute, weighing over 80 kilograms (180 pounds), in just four-tenths of a second.

ASPIRE was tested earlier this year in September. NASA hopes that it can be used to slow down a spacecraft carrying the Mars 2020 rover so that the vehicle can slow in the upper atmosphere. The parachute will then detach and the spacecraft will fire up rockets, hover over the surface and then lower the rover to the surface of the Red Planet.

“Mars 2020 will be carrying the heaviest payload yet to the surface of Mars, and like all our prior Mars missions, we only have one parachute and it has to work," said John McNamee, project manager of Mars 2020 at NASA’s Jet Propulsion Laboratory (JPL).

The parachute was carried aboard a Black Brant IX sounding rocket travelling at nearly twice the speed of sound (343 meters per second). After two minutes, the rocket reached the appropriate altitude of 38 kilometers - where the atmosphere of Earth thins and mimics the one on Mars - and released the parachute.

"Earth's atmosphere near the surface is much denser than that near the Martian surface, by about 100 times," said Ian Clark, the technical lead handling the experiment from JPL. "But high up – around 23 miles (37 kilometers) – the atmospheric density on Earth is very similar to 6 miles (10 kilometers) above Mars, which happens to be the altitude that Mars 2020 will deploy its parachute.”

In one swift expansion, it created a drag force of a whopping 311,375 Newtons (70,000 pounds of force). ASPIRE's canopy stretches over 20 meters in diameter and is made out of nylon and Kevlar. It's held together by over three million stitches and carried by threads of Technora, a strong synthetic fibre.

“The ASPIRE tests have shown in remarkable detail how our parachute will react when it is first deployed into a supersonic flow high above Mars. And let me tell you, it looks beautiful," said McNamee.

You can watch ASPIRE in action here.

It’s the third test carried out by NASA. The first two were also successful, but the previous parachutes were not as strong. “We are all about helping 2020 stick its landing 28 months from now," said Clark. "I may not get to shoot rockets to the edge of space for a while, but when it comes to Mars – and when it comes to getting there and getting down there safely – there are always exciting challenges to work on around here.”

Landing on Mars is a tricky task. Last year, the European Space Agency failed to land its Schiaparelli probe - also using a parachute - correctly. The probe spiralled at a faster rate than expected, causing the computers onboard to measure the wrong altitude and the parachute was fired prematurely. Schiaparelli plummeted and crashed into the surface of Mars, destroying itself in the process. ®