Exoplanet telescope out, and Opportunity in its last rites 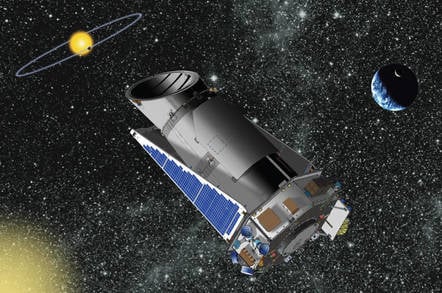 The Kepler spacecraft has coughed up its last reserves of fuel and is now retired, after helping scientists discover thousands of exoplanets for nearly a decade, NASA announced on Tuesday.

“Fuel exhaustion means it has reached the end of its space life,” Charlie Sobeck, a project system engineer at NASA’s Ames Research Center, said during a teleconference call. There were clear indications that the telescope was on its way out in late June as scientists could no longer accurately measure the amount left.

The tank started with over 3 gallons worth of fuel kept pressurised by a nitrogen gas bladder. The bladder expands as the amount of fuel drops to apply more pressure to the tank. Scientists can measure how much juice Kepler has left by inspecting the pressure the bladder exerts. But as the fuel drops below a critical amount, the bladder can’t grow and exert any pressure anymore as it is encased within the tank and readings are no longer accurate.

Kepler pooped out about two weeks ago when ground control noticed that the fuel pressure plummeted by 75 per cent in just a few hours. Solbeck said NASA managed to download every bit of data the probe had left before the mission ended.

All the transmitters have been disabled and now Kepler will be left to drift in space. “[That’s] all about what we are going to do for this spacecraft. When we say goodnight to it, it won’t continue to operate,” he said. “It’ll be trailing the Earth, 94 million miles away, at a safe distance.”

The Kepler mission began in 2009, where the telescope was sent to space to spot the tiny dips in brightness as an exoplanet crosses its parent star. Instruments onboard have to be extremely sensitive to notice the slight dimming - 1 part to 100,000 - to detect exoplanets.

Its journey across the faraway depths of the Solar System hasn’t always been smooth. A malfunction caused Kepler to lose control of two of its reaction wheels in 2012 and 2013, these act like gyroscopes to keep it in position. No longer could the probe stay locked onto a target star without wandering off into space.

Engineers managed to fix the problem by relying on the pressure of the solar wind, its thrusters and remaining wheels to keep it steady. After this, Kepler entered its second stage of the mission dubbed K2.

The spacecraft has also been repeatedly shut down into safe mode and rebooted to conserve enough fuel to relay data back to Earth. NASA retrieved its last data dump codenamed Campaign 19 in August earlier this year.

As NASA bid farewell to the hardy probe, the space agency said it was proud of what it had achieved so far. It has spotted thousands of exoplanets, 2681 have been confirmed and 2899 are candidates. Jessie Dotson, a project scientist for the K2 Mission, said those numbers were checked as of last night.

Some of those exoplanets have surprised scientists. Dotson mentioned that some of her favourite discoveries so far include Kepler22b, which may be covered in an ocean, may have an atmosphere and lies in the habitable zone around its star. She also spoke about Kepler-444, a planetary system that may harbour five rocky planets. It’s been around six and a half billion years before our own Solar System, so may have had a head start to developing life.

Kepler may be over, but NASA is continuing to hunt for alien worlds with the launch of TESS (Transiting Exoplanet Survey Satellite) earlier this year in April, and the James Webb Telescope due in 2021.

Okay, fine, Kepler's gone but what about Opportunity?

In other space-related news, the status of NASA’s Opportunity rover on Mars is still precarious. The bot was recently swamped by a raging dust storm and lost contact with its handlers since June.

“After a review of the progress of the listening campaign, NASA will continue its current strategy for attempting to make contact with the Opportunity rover for the foreseeable future. Winds could increase in the next few months at Opportunity's location on Mars, resulting in dust being blown off the rover's solar panels. The agency will reassess the situation in the January 2019 time frame,” it announced in a statement. ®