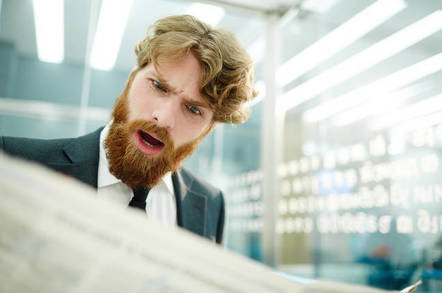 While Microsoft celebrated another earnings bonanza and its flagship operating system continued to remain conspicuously absent there was plenty for the followers of Redmond's antics to chew over.

Some things never change. It was ten years ago last week that Microsoft’s software architect Ray Ozzie took to the stage of the software giant’s Professional Developer Conference to announce that Azure was on the way.

The gang at Redmond had been looking anxiously at the tail lights of Amazon’s AWS cloud services disappearing into the distance and decided to take action. A situation which, frankly, hasn’t changed much as, ten years on, AWS still accounts for the lion’s share of the cloud market despite huge strides made by Microsoft.

At the time, however, Ozzie was tightlipped on when developers would actually get their hands on the thing, and it took until February 2010 for the product, codenamed ‘Red Dog’, to make its way out of private beta and into the open.

An exec called Satya Nadella took the reins in 2011 and the rest, as they say, is history.

“Windows Azure” became “Microsoft Azure” in 2014, as if to emphasise newly minted CEO’s Nadella’s focus on the cloud rather than the legacy Windows platform. The focus appears to be paying off as Azure revenue leapt 76 per cent in the latest set of financials from the giant. However, the cloudy upstart unit still has some way to go before it surpasses the revenues of Microsoft’s veteran Personal Computing business.

Nat Friedman stepped through GitHub’s doors as CEO for the first time on Friday as Microsoft closed the $7.5bn deal that saw the code shack join the long line of acquisitions made by Redmond over the years.

The EU waved the deal through earlier in October, coming to the entirely reasonable conclusion that attempts by Microsoft to fiddle with the platform in order to drive developers to its tools would be a colossal foot-shooting exercise. Devs would simply move elsewhere.

Friedman was at pains to reassure developers that Microsoft has no plans to blunder through the platform with a Visual Studio-shaped bat, saying that “GitHub will operate independently as a community, platform, and business.” He went on to insist that “GitHub will retain its product philosophy.”

Developers, however, have long memories. In a highly unscientific exercise (basically, your humble Reg hack asking developers how they felt about the whole thing at a number of recent conferences) there remained a prevailing sense of mistrust and suspicion. However, the vast majority were content to wait and see.

Microsoft therefore has a tremendous opportunity with GitHub to demonstrate that it truly has changed. Otherwise it might as well have set fire to that $7.5bn and will, as Friedman himself observed “lose the trust of developers for a generation.”

Lucky Brits keen on running container-tech-of-the-moment, Kubernetes, on Azure will be delighted to learn that Microsoft’s Azure Kubernetes Service (AKS) has arrived in the UK West region, meaning that both of Blighty’s Azure regions now have the tech. Handy for disaster recovery within the UK’s soon-to-be-harder borders.

AKS is a technology aimed at running Kubernetes clusters without having to faff about with manual provisioning. It made an appearance in June, but has experienced a number of what could be charitably called teething troubles. The addition of UK West brings the total number of supported regions to 14.

While Windows Server 2019 remains shackled to the mess that is the Windows 10 October 2018 Update, somewhere in a Redmond basement, the Office server team cheerfully flung out 2019 server versions of Exchange, Skype for Business, Sharepoint and Project.

The products had been in commercial preview since July, but this week saw the final release.

Microsoft would obviously prefer users spend their time (and money) in its cloudy Office 365 world, but an awful lot of customers are not quite ready to give up their on-premises gear just yet.

Skype for Business comes equipped for support for TLS 1.2 and, unsurprisingly, improved tools for migrating users to Teams (just in case customers were in any doubt of the direction the wind is blowing).

Exchange Server, while released, cannot actually be used yet since it requires Windows Server 2019. Which is MIA while “we work through a product quality issue” according to Microsoft. This raises an interesting philosophical question: if a software product is released, but no-one can install it, can it truly be said to be released?

Samsung’s Odyssey is a flagship for oddly named Windows Mixed Reality technology, boasting a higher resolution than the majority of its competitors and, sadly, a price tag to match. The dual lenses give the user a combined resolution of 2,880 x 1,600 and, with the newly launched ‘Plus’ model that… hasn’t actually changed.

Fans of Windows virtual reality instead get an “exclusive” Anti-Screen Door Effect, which should blur the fine grid that bedevils the majority of VR headsets (including those from Oculus and HTC), thus increasing the sense of immersion. Samsung claims that the tech, which is presumably a bit cleverer than spreading Vaseline over the lenses, will create a ‘perceived’ PPI of 1,233. The previous headset which lacks the new-fangled light diffusing grid could only manage 616 PPI.

The headset is also lighter and includes Bluetooth (handy for users with desktop rigs lacking the wireless tech). Alas, it is only available in the US at present. There is no word on when UK users might get a look-in.

Windows 10 on Arm has not been a spectacular success thus far. The devices, which lay claim to lengthy battery life when compared to their Intel cousins, suffer somewhat in the performance stakes, particularly when running Win32 applications.

Performance of popular applications, such as Google’s Chrome browser, when run atop the Intel x86 emulation, can best be described as glacial. Apps compiled to run natively on the Snapdragon processor, such as Microsoft’s Edge browser, perform far better.

Talking to Android Authority, Qualcomm’s Michael Nunes reckoned that, for Chrome at least, improvements were in sight.

“I expect you’ll see it probably around (the) second half of next year” said Nunes, before cautioning “Every OEM will decide whatever their launch timeline is, but we’re actively working on it.”

It would not, after all, be the first time Google has withheld a popular product from a Microsoft platform. ®