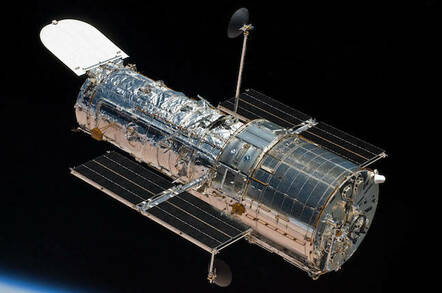 Astroboffins the world over drew a collective sigh of relief to hear that the Hubble Space Telescope has been formally returned to service.

The “all clear” came on Friday, and over the weekend, NASA set the spacecraft back to work: “The observations were of the distant, star-forming galaxy DSF2237B-1-IR and were taken in infrared wavelengths with the Wide Field Camera 3 instrument,” it said in a statement.

Getting Hubble back to science demonstrated the success of the set of engineering steps the mission team put the spacecraft through to clear a problematic gyroscope, brought into service to replace a failed gyro.

When the spacecraft is being turned to aim at a patch of sky, the gyros' spin measures the rate of spin for mission controllers.

When one of Hubble's gyros failed, mission scientists brought a spare into operation – but when powered up, something caused the spare gyro to spin too fast.

To clear the problem, NASA performed “running restarts” on the gyro while putting Hubble through turn manoeuvres (yes, pedants, “turn it off and turn it back on again was a small simplification for a headline, but it wasn't untrue). That cleared “what was believed to be blockage between components inside the gyro that produced the excessively high rate values”, NASA wrote.

There will now be a long line of astronomers and physicists keen to catch up on the backlog of Hubble missions. But it's not all good news.

On Monday NASA warned that the Kepler space telescope, discoverer of hundreds of exoplanets, might be moribund. The problem is that the telescope is nearly out of fuel and there's no way to give the tanks a top up. ®