Sorry friends, I'm afraid I just can't quite afford the Bitcoin to stop that vid from leaking everywhere

Those darn webcam hackers are at it again, maybe 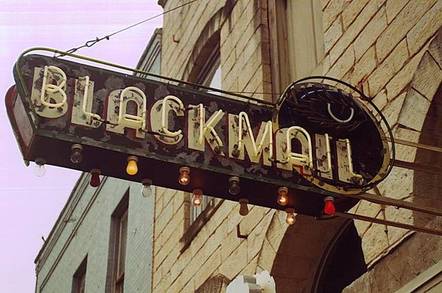 Something for the Weekend, Sir? First, an apology. Allow me to express my sincere regret for any offence caused by the videotape you will soon be receiving of your faithful servant buffing the old banana, courtesy of some mysterious stranger.

Well, perhaps not so much offence as surprise. After all, it is jolly unusual to receive a videotape in the post these days and the chances are that you won't have a VCR on which to play it. Rest assured, however, that the cassette is on its way. I do hope you accept PAL.

To make things worse, my account has been deactivated.

This would be more of a nightmare than it sounds if I knew which account. Do they mean an email account? A bank account? Mobile phone account? The account I set up at the village butchers in July 1986 so I could order four dozen sausages for that ill-fated graduation barbecue? (I graduated but it rained.)

My correspondent doesn't specify the affected account, and I have no convenient means of asking him, or her, or them, for further details. They are using a spoofed email address to announce my impending exposure.

Your PC has been caught by the corrupting file, they inform me, helpfully explaining how they deposited a virus on a soft pornography site, you hit this link and urgently installed the malicious soft to your gadget.

Don't you just hate it when you're ready for some pornographic action, only for your gadget to urgently install a malicious soft? Come on, it's happened to the best of us at one time or another. I can't say this will enhance my standing on the videotape.

That malware make your front-facing camera capturing video, they explain. Just imagine: they must have recorded hours of me picking my nose, singing badly to Nine Inch Nails, and nervously massaging my scalp in a desperate bid to delay the onset of male pattern baldness. Between you and me, I have a bit of the old "Shearer's Island" coming on. The public exposure will be unbearable.

I own the videotape with you dash your doodle.

Do what? A regular reader such as yourself will be familiar with my penchant for childish sexual euphemisms but "dash your doodle" was hitherto unknown to me. It's not a great one, mind. I prefer the lyricism of "dancing in the dragon's fiery breath", or a bit of metaphorical misuse such as "hoisting one's own petard" or the simple topicality of "defragging the hard drive".

I beg pardon for my mistakes – I'm from China.

Indeed, Google Translate's database of wanking synonyms leaves a lot to be desired.

I capture all your contact files and movie with you choke a chicken.

No need to apologise for mistakes, dude. You clearly have a way with words.

My correspondent(s) is/are keen to stress the urgency of the situation by outlining the critical time frame: During the next 4 hours this badware received all the contact information.

This is very naughty badware indeed to mix future and past tenses in such a reckless manner. Clearly, these are hardened professionals I am dealing with here.

In a case if you have a desire me to destroy all the data make payment 599 U.S. dollars in BTC crypto-currency. If not I will deport the videotape to all your contacts.

Ah yes, Bitcoin: the currency of champions. It's uncanny how every scammer, gangster and barista sneaking about in the world of badware expects to be paid in this manner. Evidently, Bitcoin is also the ideal means of exchange for people who like to record strangers tossing their cabers over the internet. Satoshi Nakamoto, I shake your hand! With gloves on, obviously.

In a case if I obtain money I will eliminate that this movie forever.

Unfortunately for both of us, this won't happen. I just checked my Bitcoin wallet at Coinbase and it's worth the princely sum of 0.00002232 BTC. While I can't complain at the multiplication of its value since I initially invested a cautious $0.0001, which has reached the giddy height of 12 pence today, it falls more than $598 short of the sum required to prevent the movie from being, er, deported.

Would you consider paying on my behalf, perchance? Consider the benefits: doing so would ensure that you do not receive an unsolicited VHS of a Register columnist tenderising his steak. I'd call that a bargain at any price.

Now that I think about it, perhaps I should begin threatening to send these videos out myself. It could be like a protection racket. Or a kind of crowdfunded auto-boycott. Pay up or witness a middle-aged British IT journalist tucking into a bit of beef jerky! I could have a website, an e-zine and everything!

I can't wait to design the logo.

Hang on... I think I've come up against a snag. I've just peeled back the gaffer tape from the front-facing camera on my laptop and launched a webcam utility, only to discover that recording myself adjusting the antenna is going to be more problematic than I thought.

When I'm sitting in front of the computer, all that the camera can see is part of my face and a lot of the ceiling. If I angle the display downwards, I can focus the camera reasonably well on my chest, but I'm afraid I'm no Errol Flynn: even in an exceptionally frisky mood, it's not going to reach that far up.

If I tilt the display further downwards, the angle is about right... for filming the desk. Also, at this angle, I can no longer see what's on-screen, which curiously negates the original scenario that is supposed to have led to me being rumbled by the blackmailer in the first place.

You see, front-facing cameras do not act like the way they are portrayed in Hollywood movies: they don't have panoramic fish-eye lenses that capture the entire room including computer user from waist down with trousers crumpled around ankles. Front-facing cameras sort of, well, face the front, don't they?

Oh well, it was fun trying. I guess we'll all have to wait until the videotape arrives and hope it contains more entertainment than you can, er, shake a stick at.