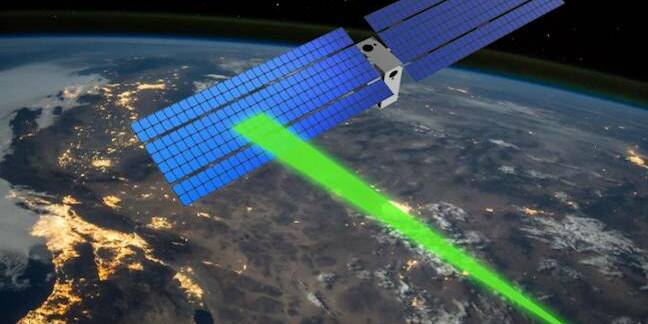 What's harder: putting a pipe of cables in the ground, or launching a satellite into space?

Well, when it comes to the screwed-up world of internet access in the United States, it seems that space is the better option.

Next month, the Federal Communications Commission (FCC) is due to vote on no less than nine issues related to space. Two of them may herald a new age of connectivity: the ability for US devices to use the new European Galileo global positioning system in addition to the long-running American GPS system; and the relaxation of rules covering satellites to allow for smaller orbiters.

Galileo, here we go again. My my, the Brits are gonna miss EU

Connecting to the Galileo system should be a no-brainer: the additional satellites should improve the accuracy of countless GPS devices, including that smartphone in your pocket. Many tech companies are already working on products that talk to both systems.

The second issue of relaxing rules for smaller satellites is significantly more complicated but has the potential to become a game-changer in terms of communication.

Thanks to the latest technology, it is now possible to launch modest-sized devices into space, and have them talk to one another – effectively creating the global telecoms networks that we have long benefitted from but at a smaller size and lower cost.

Several companies, including SpaceX, TeleSat Canada, Kepler Communications and LeoSat, are excited by the prospect, and believe it could help them provide broadband access to more remote and rural areas in the United States, as well as provide specialist services such as dedicated internet-of-things networks.

Tied up in red tape

One of the biggest issues is not the technology but the bureaucracy, form filling, and reels of red tape that accompany satellite launches. These layers of paperwork were designed for much larger satellites in higher orbits, this new wave of companies has argued for years, and the requirements are too time-consuming and stringent for the next generation of satellites.

And the FCC appears to agree, with its chairman Ajit Pai publishing a blog post on the issue this morning making it plain that he intends to vote for the proposal at its next meeting on November 15.

It's a rare occasion when Pai's oft-repeated philosophy of "light touch regulation" doesn't equate to giving big cable companies what they want, and this appears to one of those occasions.

There are concerns, however, particularly over the risk of creating vast quantities of "space junk." Earlier this year, the FCC became extremely unhappy with Silicon Valley startup Swarm Technologies after it launched four satellites into space from an Indian launch site having grown tired of the FCC's slow approval process.

The FCC said its main concern was the size of the upstart's birds – one dimension is smaller than 10cm – which may it very hard to be spotted, and so greatly increased the risk of something else, like another satellite or a space shuttle, colliding with it. That could create a lethal wave of collision after collision, as more and more debris is released, and cause havoc in space – as depicted in the hit movie Gravity.

The FCC revoked Swarm's authorization for a further launch of four satellites even though the upstart said it had developed a system to allow them to become visible. But the unauthorized launch served to highlight the red-tape problem, and less than a month later the FCC approved a plan by SpaceX to launch a fleet of more than 4,000 mini-satellites that it hopes to use to provide broadband to US residents.

Despite that approval, though, the existing rules means it will take six years for SpaceX to get half of those satellites into orbit. The new rules hope to speed that process up.

There are a lot of careful compromises in the proposed regulations. There have been numerous arguments over: minimum sizes of the satellites; minimum size buffer zone around each satellite (one suggestion was a hefty 125 kilometer distance); whether the key measurement should be mass rather than size; if a satellite should be required to have its own propulsion systems above certain orbits; what spectrum bands can be used for communications; whether there should be power limits; what the application fee ought to be; and so on.

The FCC believes it has struck the right balance – everyone seems equally unhappy – and the proposed rules will cover licenses for groups of up to 10 satellites that weigh less than 180kg, are intended to orbit the Earth for up to five years, and will not operate at more than 400km from the surface. ®