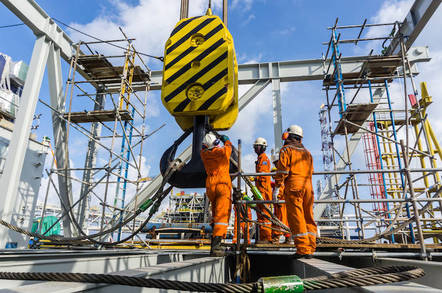 US-CERT is advising some customers of Telecrane construction cranes to patch their control systems – following the disclosure of a security bug that could allow a nearby attacker to wirelessly hijack the equipment.

The government security body this week issued an alert on CVE-2018-17935, a vulnerability in the Telecrane F25 series of controllers, which allows construction crews to remotely operate building cranes from the ground.

The F25 software was found to contain a capture replay vulnerability – basically an attacker would be able to eavesdrop on radio transmissions between the crane and the controller, and then send their own spoofed commands over the air to seize control of the crane.

"These devices use fixed codes that are reproducible by sniffing and re-transmission," US-CERT explained.

"This can lead to unauthorized replay of a command, spoofing of an arbitrary message, or keeping the controlled load in a permanent 'stop' state."

It's a bad enough flaw on its own, but what would be a moderate risk becomes a bit more scary when it involves massive construction equipment at a time when we know state-sponsored hacking groups are looking for ways to cause extensive real-world damage by manipulating industrial equipment.

Telecrane did not respond to a request for comment on the matter. ®