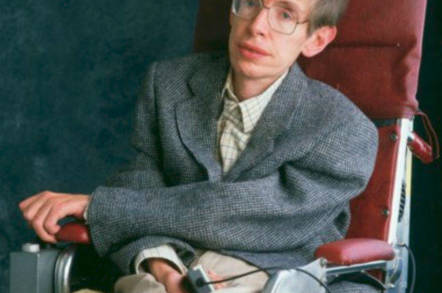 The mind is gone but the chair could be yours

The family of the late Professor Stephen Hawking is auctioning off some of his possessions – including an early version of his motorized wheelchair – to raise money for the charitable foundation that bears his name.

In all, 22 items from the Hawk will be up for grabs. These include a red leather-clad motorized wheelchair the brainy Brit used in the late 1980s and early 1990s (so sadly not the one he used to roll over Prince Charles' toes), a copy of A Brief History of Time autographed with a thumb print, a copy of his 1965 PhD thesis, some of his science medals, and a copy of the script for his appearance on The Simpsons.

"We hope to be able to offer our father’s archive to the nation through the Acceptance in Lieu process as we feel it is a huge part of his legacy but also of the history of science in this country," said the Prof's daughter Lucy Hawking.

"We are also giving admirers of his work the chance to acquire a memento of our father’s extraordinary life in the shape of a small selection of evocative and fascinating items."

The proceeds of the sale will go to the Motor Neurone Disease Association and the Stephen Hawking Foundation, which provides funding for disabled students studying science and technology.

In 2009 Hawking tried a tongue-in-cheek time travel experiment when he decided to throw a party, and didn't send the printed invitation out until two weeks after the event. His reasoning was that only time travelers would be able to attend the shindig, and as far as we know no-one showed up.

"I'm hoping copies of it in one form or another will survive for many thousands of years," Hawking said of the invitation, which currently has a guide price of just £150 ($189). "Maybe one day someone living in the future will find the information and use a wormhole time machine to come back to my party, proving that time travel will, one day, be possible."

If Hawking memorabilia isn't your cup of tea, the Christies auction, dubbed "On the Shoulders of Giants," also contains memorabilia from Einstein, Darwin, and Newton. Hawking's remains were buried this year next to Sir Issac Newton: two geniuses thus lay to rest side by side in London's Westminster Abbey.

Bidding starts on October 31, and you can view the full catalog right here. ®

Hawking says 'soft hair' explains everything. Not, repeat not, on cats