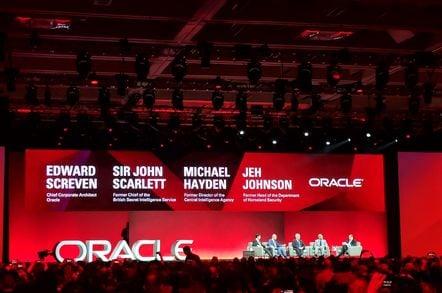 OpenWorld Former intelligence leaders have called for international terms of engagement in cyber warfare and greater collaboration between the public and private sectors to defend critical infrastructure.

The comments came at a security-focused keynote at this year's Oracle OpenWorld conference in San Francisco, where – instead of the usual parade of enthusiastic customers – co-CEO Mark Hurd took to the stage with three former spies.

John Scarlett, who led the UK's MI6 between 2004 and 2009, said that when it came to cyber attacks, there was “no sense of the rules of the game” and no international or legal structure. This lack of terms of engagement was central to the reemergence of the great tension and rivalry between different actors, he told the audience today.

However, he conceded that it is “hard to see how they [rules of engagement] can be developed and agreed on,” and questionable whether any state would trust the various sides to implement them honestly.

“We have to get our brains thinking differently,” Scarlett said, arguing that the old way of thinking about attacks and defense didn’t translate into cyber threats.

His comments came in response to Hurd’s opening question, which asked what a “9/11 cyber attack” would look like – a term that the Brit spy said that he was “wary” of using.

Similarly, former head of US homeland security Jeh Johnson said that the term was “rather provocative”, while pointing out that it could sometimes take years to assess the full impact of a cyber attack.

That said, he did suggest that the impact that Russian interference in the 2016 US elections had on democracy could be as significant as the terrorist attacks in New York.

Johnson said that the open, free society in the US, and the access to it via the internet, was both the nation’s greatest strength and a major vulnerability.

“I think all of us would agree that cyber space is the new battle space,” he said, adding that the best form of defense in this respect was a good offense – and that this should be a national and international priority for both governments and industry.

“We need to do a better job of public-private partnerships on defense of cyber space and our critical infrastructure,” he said.

Meanwhile, Michael Hayden, who has led both the National Security Agency and the Central Intelligence Agency, said that the answers will not be obvious, and that the rapid pace of technological development can lead to changing definitions on what constitutes security.

For instance, Hayden said that he had come down on the side of Apple in the battle between it and the feds seeking to break the encryption on the San Bernadino killer’s iPhone.

This was not on privacy grounds, or on commercial grounds, he said, but “on a broader definition of security”. Law enforcement’s requests were legitimate, he said, but “the costs of conceding exception access outweighed the benefits” in this case.

Hayden emphasized that this wasn’t about setting one hard and fast rule, as different factors might warrant a different decision; rather he urged a discussion of the balance of privacy, security, freedom and liberty.

Oracle has spent its annual gabfest touting the security credentials of its autonomous database and “second-generation” cloud infrastructure, and the decision to bring the three former intelligence bosses on stage also comes as it is eyeing up the Pentagon’s $10bn JEDI cloud contract.

And so it could hardly miss the opportunity to give its technology a plug, no matter how painfully orchestrated it was to have Big Red’s chief corporate architect Edward Screven sitting alongside the former spies, ready to big up his firm’s new tech.

The session ended with the more cynical members of the audience rolling their eyes as Screven opined that there was “no such thing as a civilian” in cyber warfare now – all IT professionals are on the “cyber battlefield” – but, with the technology Oracle has developed, “we can be much more effective at defending that threat”. ®