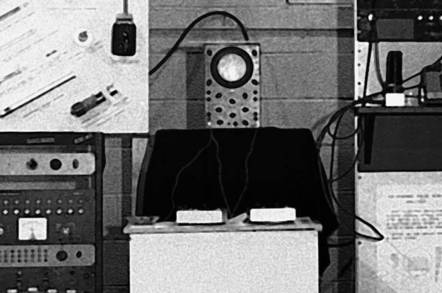 The forerunner of today's video games celebrated its 60th birthday last week as the anniversary of William Higinbotham's Tennis for Two rolled around.

Tennis for Two was built by Higinbotham as a way of injecting a bit of life into the somewhat non-interactive nature of US-based Brookhaven National Laboratory's annual exhibition. It consisted of two controllers attached to an analogue computer and an oscilloscope showing two lines representing a tennis court and net, and a bright dot to represent the ball.

Each player had a controller with a button to swing an invisible racquet and a dial to adjust the angle, and goodness, it blew the minds of the attendees of the exhibition. Hundreds queued to have a go on the wonder-device.

The "brain" of the game was an analogue computer, the Donner Model 30, which came with an instruction manual describing how to simulate trajectories and bouncing on the cathode ray tube of an oscilloscope. It was a short intellectual hop for Higinbotham to translate this into a tennis game. Advances in transistors allowed the display of the ball, net and tennis court (or rather, dot, short vertical line and long horizontal line) and, with the help of an assistant, the game was put together in three weeks.

A follow-up in 1959 featured a larger screen and adjustable gravity before the device was eventually put away and forgotten. Higinbotham reflected that perhaps a patent might have been a good idea as the likes of Pong appeared and the money began to roll in. However, as his employer, any licensing cash would have headed the government's way.

There continues to be controversy as to whether this was the very first video game. Ten years earlier, physicists at DuMont Laboratories had come up with game where a player twiddled knobs to make a dot reach a plastic target stuck on a screen in the snappily titled "Cathode-ray tube amusement device". The lack of computer involvement pretty much rules it out, however.

1951's Nimrod computer was able to play the strategy game Nim, but made do with lights rather than a cathode ray tube. 1952 brought OXO, developed by Alexander Douglas at the University of Cambridge on the Electronic Delay Storage Automatic Calculator (EDSAC), which used a cathode ray tube to show the current state of the game, albeit in a static form.

60 years on, it is Tennis for Two, a game created purely to entertain, that would be the most familiar to today's players with its controllers and moving imagery (even without the jiggly bits of today's entertainment). For his part, Higinbotham, who went on to be the first chair of the Federation of American Scientists, said of the game: "It might liven up the place to have a game that people could play, and which would convey the message that our scientific endeavors have relevance for society." As for how things turned out, Higinbotham observed: "Whether or not inventing video games is something to be proud of is another matter."

A reconstructed Tennis for Two was exhibited at the National Museum of Play in Rochester, New York, and the orginal schematics for making the thing still exist at the Brookhaven National Laboratory. ®

Interestingly, the godfather of video gaming was also on the team that produced electronics for the first atomic bomb, but Higinbotham would go on to become a major voice in the nonproliferation movement. Hopefully, nuke killstreaks remain limited to video games for the foreseeable future.