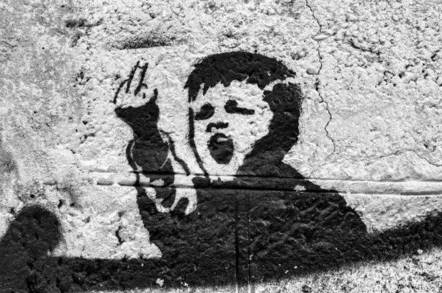 Files and URLs with raunchy words like "fuck" in them are now forbidden from being shared around the workplace, and are already being automatically filtered out to prevent staff seeing them. Late last week, a Google programmer claimed that their bosses had suddenly banned swear words from internal documents, and even shortened URLs to files were being blocked.

On Monday, The Register heard back from people familiar with the new policy, and we understand that curse words in general aren't verboten, it's just that references to sex acts are no longer allowed in workplace documents and short URLs. So, you should be able to turn the air blue all you like, just as long as you cut out the hanky-panky references and keep on the right side of Google's be-awesome-to-each-other rules. Said regulations insist workers treat each other with respect.

"Google HR, in an attempt to make the workplace more respectful, is cracking down on words like 'fuck'," the Google coder tweeted. "A casualty of this over-broad tone-policing of workplace speech is that my shortlink to a policy doc about respectful use of a well-known internal system was itself taken down.

"They grep all the links for swear words and just delete them. Apparently one person who used the 'gimme a random string' option had his link deleted because they randomly got a swear word.

Swearing at work 'good for business'

"I mean, it's not all that terrible, and it's sensible for people not to swear unnecessarily at each other, but going through and proactively removing obscure links that nobody has ever complained about feels pretty misguided."

On the one hand, the tech industry is trying to clean up its act – witness, for example, Linux kernel boss Linus "SHUT THE FUCK UP" Torvalds vowing to change his abusive behavior. On the other hand, there is some evidence that letting loose with invective is healthy and good for cognition and team building. Googlers have a habit of ripping the piss out of themselves and their projects on their internal joke board, Memegen, too. Obviously, though, no one wants to work in an office or environment that's toxic and unwelcoming.

Google has form as a censor of bad language: the Chocolate Factory's speech-to-text translation engine refuses to print swear words without asterisks. Microsoft, too, decided to take a line on this with some of its platforms.

So what's a habitual curser to do? Well, one solution could be to turn back to the roots of English to potentially escape obscenity filtering.

Want an alternative to the f-word? Try swive or sard, just like our ancestors did. If you want to insult your boss, try fopdoodle, zounderkite, jobbernowl, or queynte. Habitual swearers can be referred to as muckspouts, and male members may be deterred by a proverbial knee to the tallywags or rantallions. ®